Would somebody please just pull the plug? 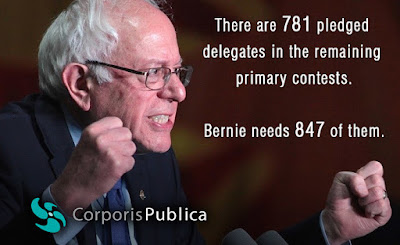 It would be a mercy killing:

Sanders said he wanted to go into the Democratic National Convention this summer with more pledged delegates than Clinton. He acknowledged that it would be an "uphill fight" to do so.

Sanders also said his campaign would talk to the superdelegates in states where he had won "landslide victories" and tell them to, "Do what the people in your state want. They voted for Bernie Sanders, you as the superdelegates should follow their wishes."

The Vermont senator went on to say that he would also talk with the superdelegates who sided with Clinton before the primary votes were cast.

"We're going to make the case for the superdelegates, "Your job is to make sure that Trump is defeated, that Bernie Sanders, in fact, for a variety of reasons, not just polling, is the strongest candidate.'"

Todd told Sanders he was contradicting himself.

"You're saying you want them to respect the vote in their state, then at the same time, you say, 'But oh, by the way, for those of you that are a superdelegate in a state that Clinton won, why don't you think about the general election?' It's a little bit hypocritical to be on both sides of those issues," Todd said.

"No, no, no, that's not what I'm saying," Sanders responded, arguing that the superdelegates have a "grave responsibility" to make sure presumptive GOP nominee Donald Trump doesn't become president.

There are only 784 delegates left to win.  He would have to win them all, plus swing 56 of Clinton's super delegates to his side.  There are no winner-take-all primaries in the Democratic primary.  Sanders fight for pledged delegates alone is pyrrhic.  His fight for super delegates is down right delusional.

Nevertheless, to his supporters he's a man of principles.

"These are my principles.  If you don't like them, I have others."