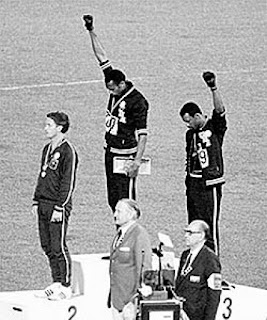 As I was saying, if you're white and angry, it's just politics as usual; or maybe it's even a new wave in politics to which attention must be paid.

If you are black and angry, you're a danger to the status quo.  A case in point.

John Carlos says what he did was not a "black power salute."  But try to find a reference to it in Google without those words.  He says that's a label applied by the "right wing media."  It's certainly a label; and it certainly wasn't supplied by him.

And 48 years later, it's still controversial.  George Wallace's claims about segregation are relegated to the dust bin of the nation's history.  We are even surprised when anyone connects his racism to modern day racism, and no one wants to directly connect Wallace to Donald Trump; well, no one respectable, anyway.

But this simple gesture still shocks us; still stirs controversy; and is still connected to an assertion of "black power."  Which is still what disturbs us most of all.