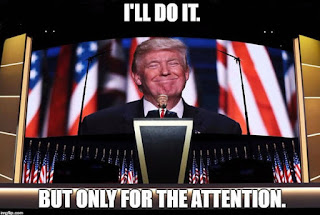 I've been following Trump's Twitter feed, waiting for him to quit tweeting about campaign events.

Today, he repaid my patience:

President Obama should ask the DNC about how they rigged the election against Bernie.
— Donald J. Trump (@realDonaldTrump) August 5, 2016

As I said, once the Bernie supporters got this one into the mainstream, it's no longer a "fringe" idea that needs a lot of explanation.  The "conspiracy" narrative is now a given (even though the primaries, like the general election, are run by the states (the state parties, in this case).  But never let the facts get in the way of a good conspiracy theory!

Last, but not least, a trip through the Twilight Zone:


The plane I saw on television was the hostage plane in Geneva, Switzerland, not the plane carrying $400 million in cash going to Iran!
— Donald J. Trump (@realDonaldTrump) August 5, 2016

Of course, he still insists Obama didn't explain the transfer of money to Iran, even though Obama explained it at a press conference yesterday, saying, among other things:

"We announced these payments in January many months ago. There wasn't a secret."


Well, it is if you don't pay attention!

But yeah, this will get attention off all the stupid things Trump has done to shoot himself in the campaign feet lately.

And in the bonus round, just after admitting he was wrong and the plane was in Geneva, not Iran (after he said the opposite for several days, and in spite of his own campaign saying he was wrong):