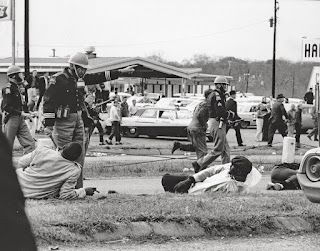 Charlie Pierce reminds us that all politics is still local.  This is an object lesson in how to get things done, and why grass roots matter, and that just because a Federal Court (or even a President) says it, doesn't mean it's so.

The lessons here are many and varied. First of all, the importance of paying attention to local offices—and, indeed, voting in local election and running candidates for them—cannot be overestimated. (Corollary: The federal courts remain a deal-breaking issue if you live in a battleground state.) Second, a lot of the pushback came from Barber's Moral Monday movement, which is to say, outside formal political institutions. This, I might add, is the way you conduct a political revolution.

The people who turned out to that meeting in Guilford County didn't do it virtually, and they didn't do it to hear their politician speak, and they didn't do it to hold signs for the TV cameras.  They did it because that's how democracy works; and it's a slow and cantankerous and clanking set of machinery indeed.  You want to get something done, you've probably got to do it yourself, and you've probably got to get all your friends to join with you, and you've certainly got to have the patience of Job.  Although if you don't catch that reference, you probably don't catch half of what the Rev. William Barber is talking about (and, as I've seen commenters on the internet do, you probably focus on that and ignore his message, anyway).*

I will say, for the umpteenth time, that Bernie's "revolution" revolved around free college tuition and punishing "Wall Street" for various unspecified sins, said punishment meant to keep them from "getting away with it" or just "breaking up" big banks, with no idea how to do that, or what would happen if you did.  Whenever the subject of voter suppression came up, it was always linked to how "rigged" the Democratic primary was, as if all voting were unitary and controlled by a single master office somewhere in D.C.

The problem with youth is, they don't know anything about history.

*and if you think this is over, read the comments at the N&R website:  such matters of law are arcane for a reason, and complex for a reason, and require diligence to change for a reason.  The Civil Rights marchers worked for change for decades; they didn't expect it to happen just because LBJ said "We Shall Overcome" in one speech.