"Every Sperm is Sacred" 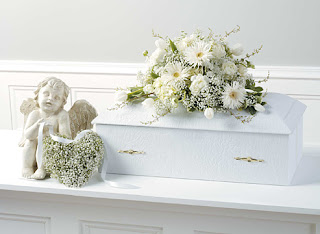 I was going to make a joke when I realized I've done these, and it's not a laughing matter.
Neither is it a subject for enforcement by the State.

Yeah, this is a STERLING idea!

The new rules, proposed by the Health and Human Services Commission, would no longer allow abortion providers to dispose of fetal remains in sanitary landfills, instead allowing only cremation or interment of all remains — regardless of the period of gestation. Abortion providers currently use third-party special waste disposal services.


The basic problem is, as Amanda Marcotte points out, the usual product of an abortion is not a dismembered fetal corpse (much as lurid anti-abortion descriptions would have you believe):

Funeral directors are in the business of burying actual bodies, not disposing of what looks, in most cases, like a really heavy period.

There is a simple public health reason, in other words, why this stuff is treated as medical waste.

This will, of course, affect spontaneous abortions, also known as miscarriages.  Ectopic pregnancies as well.  A miscarriage will require not only the pain and anguish of the loss, but a funeral director and a death certificate.  What name will you put on the certificate for a child with no gender (unless they're going to require genetic testing of the fluid, and at whose expense?)?  Do you name the product of a miscarriage?  Doesn't that just make the experience infinitely worse?  Aside from the added expense; and to whose advantage?

Is this going to happen?

With little notice and no announcement, the proposed rules were published in the Texas Register on July 1, triggering a 30-day public comment period. “Public comment will be taken and then the final rules are expected to take effect in September,” Black added.

I almost expect the funeral homes to join with the hospitals across the state to file a lawsuit against this one before October.

I wrote this last night, then this morning heard a discussion of the topic on a local radio news show (well, TeeVee couldn't discuss this; what kind of pictures would you use?).  The argument from Paul Bettencourt (whom I have other reasons to despise as a politician) are, in his mind at least, essentially Roman Catholic (he says as much).  That is, all human life deserve dignity, from "Natural birth to natural death" (Caesarians?  Death by other than natural means? I dunno.), and fetal tissue=human remains, so we must treat it as such.

Except there's a reason the state is concerned with disposal of human remains, and that reason is public health.  It isn't because we require people to treat human remains with respect and dignity.  Indeed, I can abandon my dead father's corpse with the undertaker and tell him to bury the thing, and here's the money for the services.  I can take the ashes of my deceased family member and flush them down the toilet, if I choose.  The state can't require me to act in a dignified or respectful manner at all, and where, indeed, is the dignity and respect in pauper's graves?

We should, of course, treat them with dignity while alive AND when dead; but we don't, and our entire penal system (to say the least) is predicated on removing as much dignity from prisoners as we can manage.

The "fetal tissue" of a spontaneous abortion, or an ectopic pregnancy, is, below 20 weeks and 350 grams, too small and too little to merit a death certificate under Texas law.  How is it more deserving of burial than a diseased organ, or an amputated limb?  There is as much potential human life in that clump of cells as there is in ejaculate, or menstrual flow.  Spontaneous abortions occur because the fetus cannot develop; and ectopic pregnancies are an abortion (in the literal, not medical) sense ab initio.  They are as much "human remains" as a lost limb or a removed organ.  What this rule change is, as the ACLU attorney points out, is a response to Whole Women's Health v. Hellerstedt.  They're just pushing the idea of how substantial an obstacle they can place "in the path of a woman's choice."

Bettencourt noted comments were still being taken on this rule (although he didn't allow for the rule change to be itself aborted, as it should be). Rather than just complain into the ether, I attach this comment from the Texas Tribune, and urge those affected who read this, to follow suit and comment: