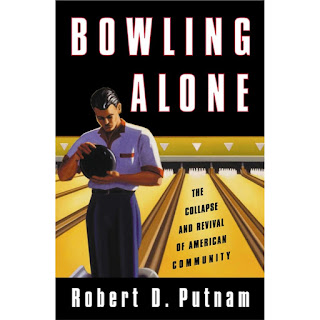 I've mentioned Clifford Simak before (but none of those references are related to this post, so I won't link them), and his prescience about technology and its affect on human society.  His major work is "City," really a collection of related stories, the central one (it won a place in the Science Fiction Hall of Fame) being "Huddling Place."

Simak imagines a future imaginable then (not now; though; and our present is unimaginable as his future; something interesting there, but we can't stop now), when technology has allowed humans to scatter into personal strongholds, away from cities because the need for them is no more (whereas, in modern times, we seem to be more dependent on cities as the base technology of sewage and sanitation and transportation make city dwelling more important than ever; well, that and industrialization, as more and more us of continue to move away from agriculture and land-based sources of income; again, the future is never what we imagine).  This is possible partly because of air travel (helicopters as flying cars) and through communication technology (that has more to do with Star Trek holodecks than Skype).

The result is, in "Huddling Place," a man who has developed such an attachment to the family estate, and such a fear of leaving it, that when he is called to perform life-saving surgery on a friend and philosopher (whose philosophy will change the shape of human existence, if he can live to write it down), he fails.  He can't leave, he can't even bear the thought of human society, and his friend dies (the drama of the story is a bit more poignant than that, but that's a fair plot summary).

Who'd have thought, with all the differences in our present and Simak's imagined future, that we were actually moving closer that that nightmare, thanks to technology Simak never imagined?

In the survey, nearly 31 percent of millennials said that the reason they use the drive-thru isn’t speed or convenience, but because doing so requires the least amount of actual human interaction. Such a tendency will, no doubt, encourage companies to further automate the fast-food purchasing process. In many airports, for example, orders are already placed in kiosks, paid by credit card in the kiosk, and picked up at the counter.

For the moment, the food is delivered by a human being — but it’s not difficult to imagine a time in which the same job couldn’t be performed by a none-too-high-tech robot of some sort. If nothing else, surveys such as this one will encourage companies to find ways to phase out employees.

“I’ve been inside restaurants where we’ve installed ordering kiosks … and I’ve actually seen young people waiting in line to use the kiosk where there’s a person standing behind the counter, waiting on nobody.”

Pudzer added that his goal is open fully automated restaurants that require no human employees.


We should pause here to point out that what happened to most U.S. manufacturing jobs was automation, not foreign competition.  Auto assembly lines use robots now, not laborers at every station performing repetitive tasks for hours.  It's probably inevitable fast food will be fully automated one day.  But it's interesting the millennials are hastening that.

I can only say my daughter, nearing the quarter century mark, would rather order on-line than go to a store (except for groceries), and I suspect she'd be more comfortable ordering from a kiosk than dealing with a human being.  And of course there are the tables of younger people in restaurants all studiously studying the screens in their palms, rather than talking to each other (the way they still do in TeeVee commercials).

This is a trend that makes "bowling alone" look like a communal activity.