His arms Never Leave His Sleeves 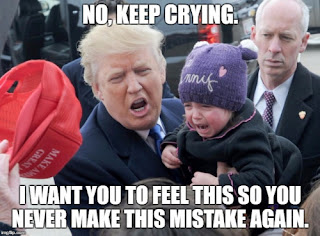 "Don't worry about that baby," Trump said after a crying infant could be heard on a broadcast of the speech. "I love babies, I hear that baby crying, I like it! What a baby! What a beautiful baby."

"Don't worry, the mom's running around, don't worry about it! It's young and beautiful and healthy, that's what we want," he continued.

"Actually, I was only kidding. You can get the baby out of here," he then said to laughs from the crowd. "I think she really believed me that I love having a baby crying while I'm speaking."

"A beautiful baby was crying. And, I mean crying like you would not believe," he said. "This baby could have been Pavarotti—in fact—I'm going to find out who that baby is, I'm going to make a deal with their parents because we can take that baby to a training school and it will be the next, great Pavarotti."

Trump went on to say he was frustrated with the "disgusting" press for saying that he "threw a baby out" of his rally.


And besides it was okay anyway, because the crowd was laughing.

It's even on videotape, but what's disgusting is that the press says he threw the baby out.  What part of "You can get that baby out of here" did the press not understand?

Who you gonna believe?  Him?  Or your lyin' eyes?  (And please note, at no point did he say he didn't throw the baby out of the rally.  Besides, it's Clinton who's unhinged and a liar.  Trump said so, so it must be true!)