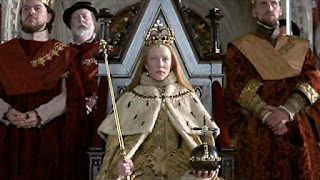 I was watching Cate Blanchett play Elizabeth again (Netflix is a wonderful thing), and to begin the coronation Christopher Eccleston as the Duke of Norfolk raises the crown and says "To the north I present Elizabeth, your undoubted queen."

There is a reason for that phrase.

In the scenes before we see Mary die of cancer (an anachronism that they call it that in the 15th century, but let it pass), and Norfolk, who has begged the Queen on her deathbed to sign Elizabeth's death warrant because the struggle between Catholic and Protestant England is in full sway, recognizes he must accept the heretic as his queen.

Well, until he can get rid of her, that is.

The phrase is not an idle one, and it is not idly put into the mouth of the man who would murder the Queen.  There is a reason for these words, too:

"Well, I’m looking at all of these decisions coming on down from the standpoint of identification, voter ID. And I’m saying, ‘What do you mean, you don’t have to have voter ID to now go in and vote?’ And it’s a little bit scary, and I’ve heard a lot of bad things," Trump told Fox News' Bill O’Reilly when asked why he's concerned the election will be rigged. “I mean, people are going to walk in, they are going to vote 10 times maybe. Who knows?"

"I'm afraid the election's gonna be rigged, I have to be honest."


You cannot preserve, protect, and defend a system of government which you have said is so corrupt its most important public process is untrustworthy and its outcome not to be credited.  Well, unless you like the outcome, of course.

As Jamelle Bouie pointed out yesterday evening, John Adams acquiesced to the victory of Thomas Jefferson in 1800, and we've been peacefully transferring power to a new executive, even after hotly contested elections, ever since.  Richard Nixon had reason to question the results in 1960; but he didn't.  Al Gore had reason to complain about the Supreme Court decision in 2000; but he didn't.  Anyone who wants to could always claim fraud at some level that led to the "wrong" outcome in the Presidential race; but no Presidential candidate of a major party ever has.

Perhaps it started with the Bernie Sanders supporters claiming fraud in the primaries, up to and including the California primary (where votes were counted after the result was declared, but didn't change the outcome).  Complaints continued up to the Democratic Convention.  Does that make Bernie Sanders supporters responsible for the comments of Donald Trump?  No, not directly; but it did allow Trump's comments to have a context, to seem quite a bit less insane than they otherwise would have.  It's already a topic of conversation; Trump even alludes to the "rigged" system that "failed" Sanders.  He knows he's not shooting in the dark.

We have to have an undoubted President.  Every candidate for President this country has had since 1800 has recognized that simple fact.  Now we have one who does not.

This will not lead to the crises and catastrophes Elizabeth I faced as she held fast to her throne.  But it shouldn't even be a question at all.  Not for the leader of a major political party.

These are very dark waters.