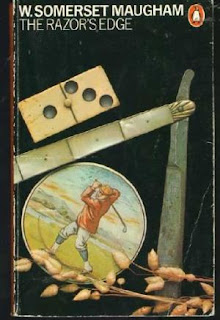 Late night reading from one of my favorite books:

"Years ago, when I was young, I knew a man who was a doctor, and not a bad one either, but he didn't practice.  He spent years burrowing away the library of the British Museum and at long intervals produced a hug pseudo-scientific, pseudo-philosophical book that nobody read and that he had to publish at his own expense.  He wrote four or five of them before he died and they were absolutely worthless.  He had a son who wanted to go into the army, but there was no money to send him to Sandhurst, so he had to enlist.  He was killed in the war.  He had a daughter too.  She went on the stage but she had no talent and she traipsed around the provinces playing small parts in second-rate companies at a miserable salary.  His wife, after years of dreary, sordid drudgery, broke down in health and the girl had to come home and nurse her and take on the drudgery her mother no longer had the strength for.  Wasted, thwarted lives and all to no purpose.  It's a toss-up when you decide leave the beaten track.  Many are called but few are chosen."

As I type those words I see them anew (it is ever the way), and realize their context assumes the lives of wealthy people who should pass on the wealth to their children, who should preserve the wealth and continue passing it on (wealthy pre-Depression America, in the novel, though Maugham here is obviously referencing the English).  And that lovely language, with the hint of moral disapproval lingering at the edges, the kind of disapproval you really can't state anymore, even though the language vivifies the horror of the work-life:  "dreary, sordid drudgery."  It's almost like something out of Dickens but, at the same time, illuminates something we have lost in expression.

Then there's the whole overall tone:  "Wasted, thwarted lives and all to no purpose."  A post-war French novelist would make that the theme of the novel, the fate of humankind.  So would many a novelist today.  On the other hand, what is accomplishment?  Kierkegaard financed most of his publications, and died young in a very public fight with the Danish church and a Denmark paper.  His work only became notable about a century later.  To what purpose is that for him?  But then, to us....

"Wasted" and "thwarted" are always, like "progress," a matter of perspective.  Still, it's a telling passage from, as I say, one of my favorites among novels.