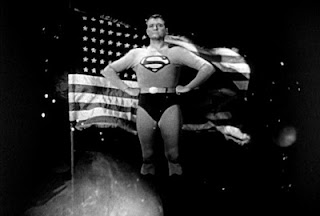 How Ron Elving and Bob Woodward see themselves, apparently.

Two opinionators go in!  Only one comes out!

So this is gonna be a thing, now:

Why Are The Media Obsessed With Trump's Controversies And Not Clinton's?

Ron Elving dares to ask the questions nobody else will!

And in this corner, the man who blames everyone but himself for the state of our political discourse:

“I think it's got to be said this is not just about Trump,” Woodward said in an appearance on MSNBC’s “Morning Joe.” “A lot of the people who really are opposed to Trump, I think, are engaged in some excessive rhetoric also.”

Because (using Woodward's example), Thomas Friedman writing a column saying Trump's adult children should be ashamed of him (the same children who all spoke at the GOP Convention and who are known to be campaign advisers and who are, need I mention again, adults) is over the line.  Because offering opinions on candidate's children Is. Not. Done!

Except I'm old enough to remember snarky remarks about Amy Carter in the White House, and about Chelsea Clinton (mostly from Rush Limbaugh, but how is he a lesser source than Friedman?  Is there a scale for these things?).  And did I mention, again, that Trump's children are all adults?  And Friedman only said they should be ashamed of their father; he didn't attack their own character.

But, you see, this kind of thing makes Donald Trump talk about "Second Amendment people" in a way that clearly refers to a last resort against Supreme Court appointments you don't like, and it forced Trump to insist (!) that Barack Obama and Hillary Clinton are the co-founders of ISIS, and he means it!

Elving's argument (to boil it down for you) is to insist that the media isn't being fair by paying more attention to Trump's lunatic baying at the moon (2nd Amendment people!  Co-Founders of ISIS!).  But hey, what about Vince Foster?  Travelgate?  Whitewater!  Monica Lewinsky?

It is not always a waste of time to replow old furrows. After all, tens of millions of young Americans who will vote this fall do not remember the scandals of the 1990s. They happened or were alleged when the millennials were in grade school.

No, seriously; that's what he said.  It's not even good farming practice, much less good journalism.

The simple fact is:  Trump has lived his life generating headlines; he still thinks any publicity is good publicity.  He seems genuinely puzzled that what worked in the primaries is not working now.  And somehow his continuing to be a public ass who has no more understanding of the office of President than your average 5 year old, and who says things that scare not only Americans, but our allies as well,  is the fault of Hillary Clinton, her supporters, and the media, who don't talk enough about scandals that occurred before most Millenials were born (especially the ones just old enough to vote this year), scandals that were a waste of time then but, hey, Clinton!

Tell me again there's no such thing as Clinton Derangement Syndrome, and that "Fair and balanced is pointing out both sides do it" isn't completely insane.
Posted by Rmj at 4:44 PM