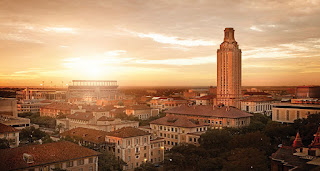 Not an historic photo (Memorial Stadium, just below the sun there, wasn't that big yet),
but a fine illustration of how the Tower dominates the campus.*

50 years ago, on this day of the week, on this date, Charles Whitman climbed the stairs to the top of the UT Tower and began shooting people.  It was, it turned out, the first mass shooting in U.S. history.  We didn't have words for it; we didn't have the concept for it.  The U.T. campus was closed the next day, but that was just so the blood on the concrete could be cleaned up.  Classes resumed on Wednesday, as if nothing had happened.

No counseling; no prolonged examination of the crime scene; no closing off the campus while a minute inspection of the area where the shots were fired was conducted.  No prolonged discussions about drugs (turns out Whitman was an amphetamine fiend, as were many students in those days), or firearms, or even violence.  A combination of technologies (the Tower, guns, even processed foods Whitman carried up with him, preparing for a long siege) made the incident possible (he wouldn't have done much with a bow and arrow), but none of that was examined or, apparently, has really been examined in 50 years.  Is it too much to say that this is when the modern era of death for American civilians began?

I could write about this, but I was 11 at the time of the events, and not really paying that much attention.  I remember Kennedy's assassination 3 years earlier more strongly than this event; who knows why?  I would, instead, direct your attention here.  The campus map is revealing.  The buildings are still there; the unlabeled ones at the bottom of the map, just running off the page (and just out of reach of the sniper) are the ones where I attended classes some 12 years after the shooting.  Seemed like a long time later; then; it seems odd now it was only 12 years afterwards.

I would also direct your attention here, where historians have a crack at this event, finally.  The "most important event to take place in modern Austin history" gets no attention in Austin (the most I recall when I was on campus is that the Tower was still closed.  It re-opened years after I left the school.), and not that much attention in America.

Maybe it should.  Maybe studying this event and its roots would tell us more about modern America. It might certainly tell us things we really need to know but still, after 50 years of mass shootings, continue to ignore.

And yes, this is the day the Campus Carry law goes into effect in Texas.  Lt. Gov. Dan Patrick, who promoted the law, claims he had no idea of the coincidence of the dates.  Probably not; but that's another reason we shouldn't be ignorant about history.**

*and is it an accident that violence at towers figures so prominently in what we consider the most important events in modern American history?  Or that one tower looms, while the other recedes?  And which represents the greater danger to daily life?

**A separate conversation is how this event created our modern history of shootings.  Once it is thinkable, collecting an arsenal and ammunition to shoot people is now considered so commonplace we don't find such armament unusual.  As the history site above notes, that kind of arsenal wasn't considered unusual in 1966, either.   We have the technology and now we have the idea, and that idea has become so common it's the weeks without a shooting of any kind that is unusual.