Watch the donut, not the hole 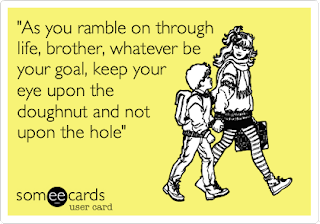 I'm too lazy to register with websites to comment anymore, so when this struck me as not the good idea you might imagine it to be, I brought it over here:*

Mind you, we don’t know how he plans to pay for this, or any other details. But on the face of it, a tax deduction for child care is something Democrats have been pushing for since forever. It’s a good idea, but one which is completely at odds with the Tea Nut rhetoric about “simplifying our tax code” and all that.


As Jared Bernstein pointed out on "Here and Now" while waiting for The Donald to make his (thoroughly flat and canned) speech (the most interesting parts were the silences where protestors were led out), a tax deduction only benefits people with enough money to make tax deductions.  So a tax deduction for child care would work for the person who hires an au pair to raise the kids.  It wouldn't apply to the working class people who need day care so they can go to work and make just enough money to pay for the day care.  And if they did spend more on day care in a year than their personal deduction, the amount over that that came back to them as a tax refund a year later, wouldn't exactly repay the cost of childcare.

Per 2015 data, personal exemption was $6300.00 for an individual, twice that for a married couple, and $9300.00 for a head of household.  Even the mortgage interest deduction isn't a benefit to the majority of Americans.  So it sounds like a good idea, but if you can't itemize your taxes, it's no benefit to you at all.  It "trickles down," in other words, from the wealthy to the upper-income homeowners to the single-parent trying to work full time; and the latter doesn't even get wet.

Or, as Elizabeth Warren put it:

Even @realDonaldTrump's childcare plan gives billionaires w/ a nanny a tax break while millions of low-income households get nothing.
— Elizabeth Warren (@elizabethforma) August 8, 2016


*As for Trump's economic plan:  even Newt Gingrich admits it's all smoke and mirrors.