And the reason it doesn't cross the line 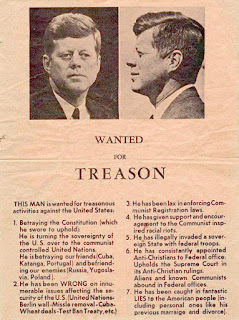 is that we erased that line a long, long time ago.

Remember when scenes of police violence would trigger outrage?  Bloody Sunday in Selma, Alabama.  Bull Connor, who JFK said did more for civil rights than any other individual in the country?

And now we have police shootings in Ferguson that leave a black man on his back in the streets for hours, or a man shot trying to help his autistic charge return to the house where his charge lives, or the black child shot for playing with a toy gun, and the outrage is....against the outrage?

We've pegged our outrage meters.  So when Trump says:

If she gets to pick her judges ― nothing you can do, folks.  Although, the Second Amendment people. Maybe there is. I don’t know.

We've heard it before:

Republican Senate candidate Sharron Angle stirred up a small scandal in 2010 when she said Americans might consider “Second Amendment remedies” to control an unchecked Congress. But Angle was only stating concretely what most Americans now appear to believe abstractly: A 2013 Rasmussen poll found that 65 percent of Americans believe “the purpose of the Second Amendment to ensure that people are able to protect themselves from tyranny.”

... Before winning a Senate seat in 2014, Iowa Republican Joni Ernst described her belief in “the right to defend myself and my family—whether it’s from an intruder, or whether it’s from the government, should they decide that my rights are no longer important.” In his 2014 book God, Guns, Grits, and Gravy, former Arkansas governor and frequent Republican presidential candidate Mike Huckabee seemed to endorse an actual “revolution” against “Big Government’s overreach.” During his presidential campaign, Ben Carson described the Second Amendment as a defense against “tyranny,” insisting that it was ratified to “make sure” that “the government remains constrained.”

... interviewing a Nebraska Republican lawmaker in 2015, I was startled to hear him proclaim that the purpose of the Second Amendment was to allow an “armed population” to revolt against a democracy that “did not function well.” Echoing this sentiment in April, Texas Republican senator and failed presidential candidate Ted Cruz wrote to his supporters:

"The 2nd Amendment to the Constitution isn't for just protecting hunting rights, and it's not only to safeguard your right to target practice. It is a Constitutional right to protect your children, your family, your home, our lives, and to serve as the ultimate check against governmental tyranny—for the protection of liberty."

But it's not like anybody really means it; right?**

*Credit where it is due; Stern points out the purpose of the 2nd Amendment, per recent Supreme Court rulings, is to provide for a modicum of self-defense.  Cruz only turns that into a defense against "tyranny" in the last prepositional phrase of his sentence.

**And yes, Trump's statement delegitimizes American politics as surely as his complaints against the "rigged" electoral system (which the media exaggerated anyway, he now says; because apparently the system lets people without ID's vote), but then again, hasn't the GOP wind been blowing that way since Goldwater lost and LBJ told a joint session of Congress "We Shall Overcome"?  Maybe we should start thanking Trump for pointing out how naked the GOP really is.  It's about time they felt the cold.
Posted by Rmj at 4:58 PM