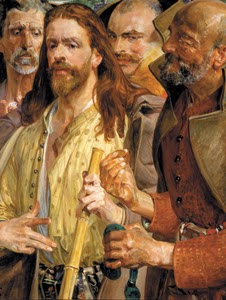 Religious suffering is, at one and the same time, the expression of real suffering and a protest against real suffering. Religion is the sigh of the oppressed creature, the heart of a heartless world, and the soul of soulless conditions. It is the opium of the people.

And if religion is given up, are the people then free to "demand...their real happiness"?  No, not really.

It seems pretty clear that lower income people are more likely to buy this as an investment and not just as a game.....In other words, lotto games aren't merely just another form of cheap entertainment like movies, they're also a prayer against poverty.  And so is this the kind of government...we want to fund, one that asks lower income people who have been hurt by globalization and technology in the last twenty years to bear more of government spending and then to call it a voluntary act at the end?...It seems to me what is happening here is that, because the effective tax rate of lotteries, at 40% or above, is so high, that what you're essentially doing is asking people to give you their prayers, and then taxing their prayers against poverty.