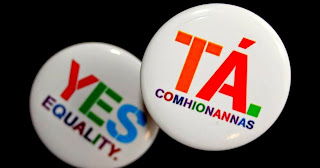 The conventional wisdom is that human rights should never be subjected to a referendum because that's not how human rights issues should be enshrined into law.

"We're the first country in the world to enshrine marriage equality in our constitution and do so by popular mandate. That makes us a beacon, a light to the rest of the world, of liberty and equality. So it's a very proud day to be Irish," said Leo Varadkar, a Cabinet minister who came out as gay at the start of a government-led effort to amend Ireland's conservative Catholic constitution.

People were apparently actually returning to Ireland from around the world for this vote.  Tens of thousands of young Irish voters voted for the first time, mobilized by a clearly effective social media campaign.

Well, and a sense of humanity:

Fianna Fail party leader Michael Martin, a Cork politician whose opposition party is traditionally closest to the Catholic Church, said he couldn't in good conscience back the anti-gay marriage side because "it's simply wrong in the 21st century to oppress people because of their sexuality."


I cannot but contrast that with the grieving father wondering still why "gun rights" trump his son's right to be alive, and the sheer hatred heaped up by people who will scream at grieving family members about their "right" to "bear arms."  Or, more relevantly, the right not to bake a cake.

And all I can say is, we are clearly a lesser country, and a lesser culture, and a lesser people, than the Irish today.  They are to be congratulated on their morality, and their humanity.