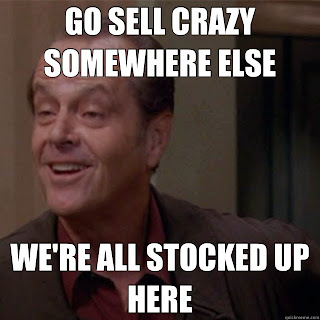 When I was a kid, the joke was to pose menacingly and proclaim:  "I know karate!  And a bunch of other Japanese words."

Now, of course, we know "jihad."  And one or two other "Muslim" (actually Arabic) words.

So this morning the first thing I hear on the news is that two men brought jihad to my fair state of Texas.  Except; not so much.  Two men did open fire in Dallas last night, hitting a security guard in the ankle.  Fortunately he was not seriously injured and is already out of the hospital.  The two gun men were, however; the police shot them to death.

And now Pam Geller is making the most of the situation.  Feh.

First thing on the news this morning that I paid attention to is that Dallas is in the news because of a "contest" to draw Muhammed that drew (sorry!) two gunmen who were shot to death by Dallas police officers.

And then I find out Pam Geller is involved.  Seems she couldn't generate enough response in New York, so she had to come down to Texas.

It ties in, oddly enough, with where I ended my reading in Karen Armstrong's The Case for God (and they say there is no God!  Hah!).  But a moment, please, to reflect on the fact that, in order to prove "the war is here," Pam Geller had to do everything she could to start that war (including flapping $10,000.00 in the public face of Dallas.  "She said in a statement issued Sunday night that the shooting showed how 'needed our event really was.' "

Yeah:  we desperately needed a reason for people to start shooting each other.  So First Amendment and Second Amendment rights come together, and we end up with one security guard shot in the leg (released, thankfully, from the hospital now, so his injury was not severe) and two men gunned down.    In fact, it seems the gunman thought shooting from a vehicle was as easy as it was in the movies.  Fortunately, they were wrong; and thanks to a police officer who must have been a very good shot indeed, even body armor didn't allow them to commit more mayhem.

As for "Why Garland, Texas?", it turns out Ms. Geller didn't just throw a dart at a map:

"In Garland, theres a large Muslim-American community that’s been building an Islamic center," Duss explained. "In Geller and Spencer’s telling, Muslim-Americans simply practicing their faith non-violently is part of this mass plot to eventually take over the institutions of the United States."


Thanks, Pam.  Stay in New York, will ya?  We don't need your kind down here.

Adding:  I mean, when even Donald Trump thinks you've gone too far....