Entries for the Commonplace Book 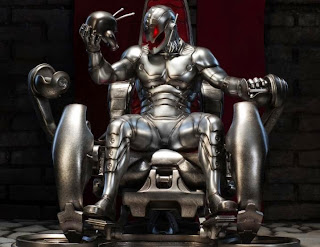 Godel's conclusions bear on the question whether a calculating machine can be constructed that would match the human brain in mathematical intelligence.  Today's calculating machines have a fixed set of directives built into them; these directives correspond to the fixed rules of inference of formalized axiomatic procedure.  The machines thus supply answers to problems by operating in a step-by-step manner, each step being controlled by the built-in directives.  But, as Godel showed in his incompleteness theorem, there are innumerable problems in elementary number theory that fall outside the scope of a fixed axiomatic method, and that such engines are incapable of answering, however intricate and ingenious their built-in mechanisms may be and however rapid their operations.  Given a definite problem, a machine of this type might be built for solving it; but no one such machine can be built for solving every problem.  The human brain may, to be sure, have built-in limitations of its own, and there may be mathematical problems it is incapable of solving.  But, even so, the brain appears to embody a structure of rules of operation which is far more powerful than the structure of currently conceived artificial machines.  There is no immediate prospect of replacing the human mind by robots.

In the period between the invention of the telephone relay and its apotheosis in the digital computer, the brain, always understood in terms of the latest technological inventions, was understood as a part telephone switchboard or, more recently, as an electronic computer.  This model of the brain was correlated with work in neurophysiology which found that neurons fired a somewhat all-or-nothing burst of electricity.  This burst, or spike, was taken to be the unit of information in the brain corresponding to the bit of information in a computer.  This model is still uncritically accepted by practically everyone not directly involved with work in neurophysiology, and underlies the naive assumption that man is a walking example of a successful digital computer program.
....

[A]lthough human performance might no be explainable by supposing that people are actually following heuristic rules in a sequence of unconscious operations, intelligent behaviors might be formalizable in terms of such rules and thus reproduced by machine.  This is the epistemological assumption.

There is also an "ontological assumption."  It is the "assumption that this world can be exhaustively analyzed in terms of context-free data or atomic facts."  Nagel and Newman actually address this assumption in their explanation of Godel's theorem, as a matter of context for understanding what Godel established.  Modal logic arose as an effort to remove context from data and so provide it with a system that would allow understanding free of assumptions that confuse the analysis of logic.  It's part of establishing an axiomatic system from which formalizable information can be derived, and it is a laudable and powerful tool.  However, as Godel's theorem shows, you eventually have to resort to information not available within a formal system to establish the consistency of the formal system (and what makes that new system consistent, i.e., incapable of producing contradictory conclusions)?

Post-modernism has been working on the "ontological assumption" for some time now.  It has been weighed and found wanting.