Texas, Our Texas, all hail the scaredy-cat state 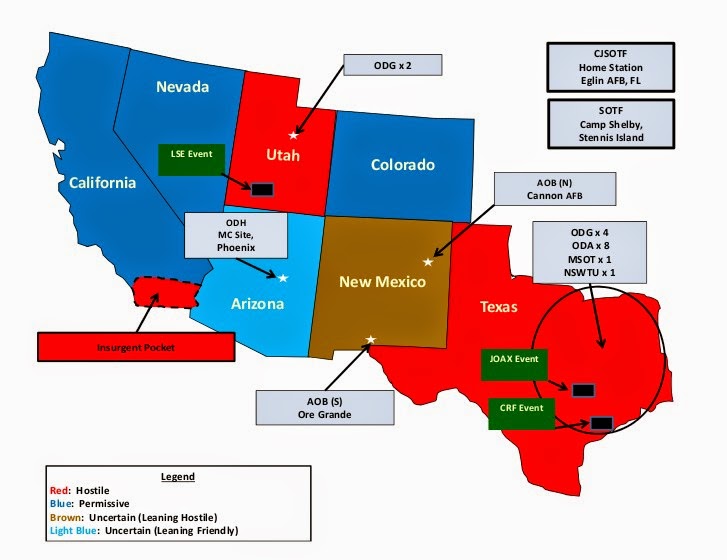 I was going to stay away from this, simply because I'm trying to give up the stupid (it burns!), but this letter to our esteemed Governor deserves wider distribution (not that it will get it here!).

It seems that something called "Jade Helm" is going to be conducted by the U.S. military in states from Texas to California.

Now, you could take this Army Times article and decide there may be much ado about nothing in this, since Gov. Abbott's letter comes off as perfectly reasonable.  As the article says, the Texas Guard has the :

....standard responsibility of acting as a liaison when federal military deploys in Texas for any reason.

"U.S. Special Operations Command (USSOCOM) has assured Texas that each location selected for training exercises will pose no risk to residents or property and that they will coordinate with local residents via verbal and written communication," Abbott wrote in his letter to Maj. Gen. Gerald Betty, commander of the Texas State Guard.

Maybe this is much ado about nothing.  But Gov. Abbott said in his letter that "During the training operation, it is important that Texans know their safety, constitutional rights, private property rights, and civil liberties will not be infringed."  That was a point Gov. Abbott made sure to underline on Twitter.  How the Texas Guard is going to do this by facilitating "communications between [the Governor's] office and the commanders of the Operation" is still a bit murky.

Which brings us to Todd Smith's letter.  Like Mr. Smith, I am "horrified that I have to choose between the possibility that my Governor actually believes this stuff and the possibility that my Governor doesn’t have the backbone to stand up to those who do."   Because what is the Texas Guard going to protect us from?  Wal-Mart closing any more stores for plumbing repair?  Maybe the General Betty needs to be in communication with Bentonville, too.

There are, by the way, 7 Air Force Bases in Texas, 10 Army bases (ranging from depots to 3 Forts), and 4 Naval bases in Texas  (San Antonio alone has six bases, a mix of Air Force and Army.)  It's no coincidence this kind of noise is coming out of Bastrop, Texas, a small town east of Austin that used to be a sleep rural community, but now is practically an Austin suburb.  Too much change too fast makes people hinkey.

That, and the majority of the reliable GOP vote is in rural Texas, or what used to be rural Texas.  As one Democrat noted, Abbott has yet to stop campaigning for the GOP primary.  Most Texans, indeed, aren't like this.

But our governors continue to embarrass us on the national stage.  Must be something in the water; or maybe that's why Wal-Mart closed those stores.