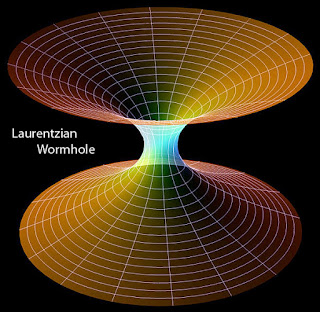 I'm going to do this in two or more pieces (and then probably never finish it, so be warned), and I want to start here, because it came on the radio this morning after a few thoughts fit together on the bridge table of my mind (where the jigsaw puzzle is laid out; whether even all the pieces are there has yet to be determined, thanks to Godel and Schrodinger).  Call it synchronicity, call it coincidence (the mathematical model), call it what you will.

I called it odd and a little inspiring.

We like to speak of common sense — of understanding, shaped by common experience. You and I share similar sensory input, so we share ideas about reality. It's that common sense that keeps us from stepping out of a two-story window. We don't have to know Newton's law of gravity. But even Newton's laws are limited to our slow-moving experience. If we moved near the speed of light, Einstein's relativity would change what Newton tells us.

Common sense could never tell us that we'd return from a high-speed trip to Alpha Centauri less aged than those back on Earth. That's a most uncommon result of relativity theory.

Common sense gets really tricky when we think about time. After all, we never really experience time; we know only present moments. Yet we do have a sense that moments flow toward what we call the future. Common sense is what tells us that a teacup, fallen on the floor, won't repair itself and fall back up on the table.

Still, I'm told that the Comanches did not see time as moving ahead. Instead, their common sense told them that we live the same year, over and over, while people and events in that year change. And I wonder — just how would I contest that idea?

To get beyond the limited reach of common sense we use remarkable measuring instruments. And, when we reach the limits of what they tell us, we turn to tools of math and logic. As we do, we learn things that far outrun common sense. And, it's small wonder that people outside science often view it with distrust.

Once instruments, logic, and math have so magnified what our senses tell us, common sense stops serving us. We find things stranger than we ever imagined — that Earth is not flat, but also that space itself is curved. We learn that, if an object is small enough, it can no longer have a definite location.


As you will see (soon enough, I hope), I'm intrigued by the idea of "common experience," especially as it impacts how we know what we know.  For example, children ask their parents "How do you know when you're in love?"  Nobody has an answer for that, exactly.  "You just know," we usually reply.  It's kind of like asking what coffee tastes like, or raspberries.  Aside from chicken, what comparison do we have for flavors?  Coffee doesn't taste like tea, but how is it different, exactly?  What does coffee taste like?

And yet no one worries about the common experience of enjoying a cup of coffee, or who prefers it to tea.  The tiny window of our common sense is very cramped, indeed.

I'm also intrigued by the experience of time.  We have one concept of time today, and we are convinced it is universal and immutable and inalterable.  Except for that Theory of Relativity stuff.  Or when we look at the experience of other cultures (which we seldom do).  I'm equally interested in the idea of the "adolescent brain," an idea important to us because of modern culture, not because of something fundamental to human anatomy.  For one thing, we don't mean the "brain" of the adolescent (whatever that is, but I'll come back to it in a second), we mean the "mind" more or less "arising" from that brain.  And what do we mean by "adolescent'?  It's a new term, like "teenager."  It's maybe less than 100 years old, as we apply it.  It suits our social order, not the biology of homo sapiens.  But we use it because it suits us, and because it suits us we decide it describes the substance of reality, a substance which cannot be altered, because it so much conforms to our "common sense."

Which maybe ain't so common after all.

Then, of course, there's the simpler fact, illustrated in the brief essay I quoted, that we have to take most of what science explains to us on faith.  Einstein tells us space and time are connected, and space can effect time, and time itself can be altered by velocity.  Do we really understand this, or do we just accept it as true because we trust science?  We are told that physicists with expensive particle accelerators at their disposal have discovered truths about reality.  Have they, or do we just believe them because so much of society's resources have been invested in the endeavor?  And how different is that from the trust in the "witch doctor" in non-Western cultures, or in the parish priest in medieval Europe (which trust was never 100%; just read Chaucer, that's all you need).

Yes, science can tell us that elephants hear infrasound (frequencies too low for our ears) and that ultraviolet light can be seen by insects.  But we trust science to tell the truth about these things, because how can we ever know such statements are true?  Without resort to more science, we can't; which is the same complaint commonly raised against religious thought.

So how do we settle this issue?  With common sense?  Or do we need to settle it at all?  After all, what does coffee taste like?
Posted by Rmj at 2:45 PM