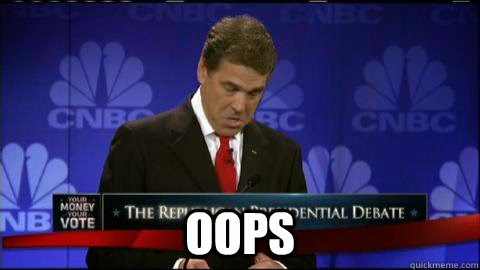 Rick Perry could have run for Governor again.  As the GOP candidate, he would have been a shoo-in.

That one word ended it for him.  He made a fool of himself on the national stage.  He did it while being Governor of Texas.  That, coupled with the fact he "retired" while still in office, meaning he drew his retirement pay as well as his salary while still Governor, and while running around the country raising money so he could run for President, until:  "Oops."

But no worse than Perry making Texas look stupid.  We wear our state heart on our sleeve, down here.  We swagger and brag and laugh at the "Yankees" who don't realize "Don't Mess With Texas" is an anti-litter campaign, not a warning.  Sure, it makes us look arrogant to keep that motto around (it's older than my daughter, who is into the third year of her second decade), but we know what it means and we like having the joke on the rest of you, even if it seems to be at our expense.  In fact, it's one of the best characteristics of Texans:  to laugh at our own expense.

But we don't like our Governors to make us look stupid.

Which brings us to Gov. Greg Abbott.  Nobody in the Dallas-Fort Worth area is stoking fears of ISIS and terrorists after the shooting in Garland.  Public officials there are rightly putting the blame on the shooters and Pam Geller, and the Muslim community in the Metroplex (D-FW's name for itself; two big cities and lots of "suburbs" around it; probably the most populated area in Texas, but not the largest city because there are so many cities in the area) is supporting, and supported by, the community.  No one in Garland or environs is cheering the idiots who armed themselves and died hoping to kill others first.

But a handful of yahoos in Bastrop, a city just outside Austin (practically a suburb now, though it wasn't even a bedroom community when I moved away from Austin 20+ years ago), have so terrified the Governor that he's made us the laughing stock of the country.  Sen. Joe Manchin is openly inviting the U.S. military to come to West Virginia.  The Governor of Utah has, quite sensibly, poured ice water on the whole conspiracy notion.  And Gov. Abbott has put himself in the company of Alex Jones and Chuck Norris.  Yes, Norris campaigned for Abbott, but you're supposed to put people like that aside when you assume office.

It may be too soon to say that for Abbott; this may not be his "oops" moment.  But he hasn't acknowledged that he screwed up, and every day brings more news reports about how paranoid Texas is.  Texas doesn't like to see itself as paranoid.  It doesn't like to see itself as stupid.  If this doesn't go away soon, Gov. Abbott may find himself a one-term governor, with diminishing influence in the Legislature.

The legislative session ends the first of June.  Barring special sessions (which the Governor has to be careful to call; legislators have jobs, Texas doesn't pay them to be full-time solons), they will meet only one more time in Abbot's first term.  If he is a lame duck by then, he won't likely be around for two more legislative sessions.