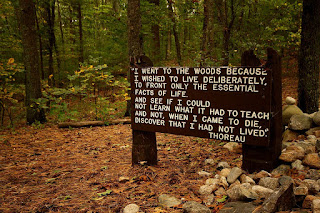 I went to the woods because I wished to live deliberately, to front only the essential facts of life, and see if I could not learn what it had to teach, and not, when I came to die, discover that I had not lived. I did not wish to live what was not life, living is so dear; nor did I wish to practise resignation, unless it was quite necessary. I wanted to live deep and suck out all the marrow of life, to live so sturdily and Spartan-like as to put to rout all that was not life, to cut a broad swath and shave close, to drive life into a corner, and reduce it to its lowest terms, and, if it proved to be mean, why then to get the whole and genuine meanness of it, and publish its meanness to the world; or if it were sublime, to know it by experience, and be able to give a true account of it in my next excursion. For most men, it appears to me, are in a strange uncertainty about it, whether it is of the devil or of God, and have somewhat hastily concluded that it is the chief end of man here to "glorify God and enjoy him forever."

If you are reading this within a week or so of when I publish it, check the front page of Religion Dispatches for all the articles responding to the latest (again!  Timeliness!  The internet is out of date faster than the dailies!) Pew report on why we are all godless heathens.

Well, no, we aren't, but we are supposed to think something on those lines.  Pastor Dan has one; there's another by Peter Laarman (another UCC pastor, along with Pastor Dan); another by Timothy King; still one more by Kaya Oakes;  and there's still one by Sarah Posner.*

And frankly, no offense to any of those writers, but none of them tell me anything I didn't already learn from Robert Wuthnow in the late 90's in seminary.  I just pulled one of his books off my shelf, something I marked up in 1997 or so; and I was struck how nothing has really changed in 18 years.  Except, of course, that we keep rediscovering the wheel that is the church in crisis.

The same crisis, as I've said ad nauseum, that T.S. Eliot was describing almost a century ago, now.

When does this disaster finally arrive and sweep all of Western culture before it?  I feel like I've been waiting 60 years for the fulfillment of this prophesy, and it still won't come.  Maybe it's something to do with messianism?

Wuthnow in '97 was very earnest about the crisis in the churches, which he blamed largely on middle-class pastors not relating their preaching to middle-class lives.  And yes, I did know pastors who still hadn't quite recognized, in the late '90's, that the average American family included two adults working outside the home, and schedules of play-dates and athletic practices and all manner of "extra-curricular" activities that would challenge the organizing skills of an events director on a cruise line, as well as the pressures (building since the '70's) to run as fast as you can just to stay in one place (because no child can be left behind without a cell phone/iPad/iPod/what have you; and no adult, either!  Nor be denied satellite TV and Netflix and Blu-Ray and...and...and....).  Pastors were, curiously, caught in a  time warp where it was perpetually 1959 and June was in the kitchen in her high heels and pearls worried about the Beaver.

Wuthnow was describing that 18 years ago, and advising preachers to talk about the daily lives of their parishioners, and encourage them to give so the church could stay open and pay its bills (and especially give its pastor a raise).  And he was completely wrong; because the churches he described with staff and middle-class congregations were not the churches full of the elderly on fixed incomes with no vision for the future except God's waiting room, and no interest in the future either except as an undisturbed continuation of the present; and who quit working shortly after June stopped worrying about the Beaver, because the show had gone off the air.

Or they might as well have, for all they were aware of the radical changes in the American home and business since the inflationary days of the '70's gave way to the yuppies of Reagan's Morning in America.

And the French are right:  the more things change, the more they stay the same.  But the changes are different for each church, and the causes of the changes are different, and the same.  Some of it is the American determination to go bowling alone.  De Tocqueville marveled at how many private organizations we started as Americans.  My father was an Optimist.  He went to regular meetings, we sold Christmas trees at Christmas and cokes at the parades in the spring to people standing on the street watching, and they are some of my favorite childhood memories.  He was a member in good standing.  Who joins the Optimists now?  Who is an Oddfellow, an Elk, a Shriner?  People used to go to church for the same reason they joined such clubs:  because it is what people did.

People don't do that anymore.  There's a reason for church decline that isn't connected to disillusioned Millenials or disinterested Gen X'ers or the corrosive influence of knowledge flowing into homes through the internet.  Church attendance, as even Wuthnow was noting 18 years ago, has been in decline since its peak in the 1950's.  When does it finally decline to the point that we can say there has been a significant change?  Or has that already happened, and we just won't admit it?

Harvey Cox made a splash in 1965, coat-tailing on the "God is Dead" movement with his book The Secular City.  The church, he said, was defunct.  We had to accept, as Christians, that we were living in a secular city into the foreseeable future.  By 1969 he was writing about the revival of Christianity in Feast of Fools, and praising the spirit he identified in that book, in the 1973 play "Godspell."  Which hit Broadway largely because of the reception of the rock opera "Jesus Christ Superstar."

When does the collapse finally happen, so I can quit anticipating it?  But more to the point: when does the internet finally start providing information that is true and can be trusted?  Because the latest favorite meme is that religion is in decline because people can read about biblical archaeology or biblical scholarship or just the wit and wisdom of Lawrence Krause (who insists science is not a philosophy but Truth!, which makes it a religion) or Daniel Dennett (who insists philosophy must be a science to be True!) or Richard Dawkins (proud of his ignorance of subjects he disdains and disparages), and yet none of it is even on the cutting edge of the 19th century.  There is still more information in books (even if they are digitally available!) than on the whole of the internet, but books are tl;dr.  What matters in this brave new world is not facts and knowledge but opinion and stridency.

Which is not really any different from the world of the telegraph in 19th century America, when American skepticism, which became a branch of philosophy known as Pragmatism (see William James and, in the 20th-21st century, Richard Rorty), came into its own.  So what has the internet done for the dissemination of knowledge?

Little more than dump muddy water into the pond.  Maybe Thoreau was onto something:

We must learn to reawaken and keep ourselves awake, not by mechanical aids, but by an infinite expectation of the dawn, which does not forsake us in our soundest sleep. I know of no more encouraging fact than the unquestionable ability of man to elevate his life by a conscious endeavor. It is something to be able to paint a particular picture, or to carve a statue, and so to make a few objects beautiful; but it is far more glorious to carve and paint the very atmosphere and medium through which we look, which morally we can do. To affect the quality of the day, that is the highest of arts. Every man is tasked to make his life, even in its details, worthy of the contemplation of his most elevated and critical hour. If we refused, or rather used up, such paltry information as we get, the oracles would distinctly inform us how this might be done.


If not by experience then by true knowledge.  We must learn.  We think the internet has made auto-didacts of us all, but the hardest part of learning is to learn what you don't want to know, to engage what you don't want to consider, to wrestle with arguments and ideas you cannot overcome.  Auto-didactism is so much sausage stuffing without the struggle.  It is the building of walls, not the removal of them.  And that is what education should do:  remove walls, make us aware of the complexity of the world, of the messiness of life, of the importance of the other to our Self.

So perhaps to reawaken ourselves we need to be less like Thoreau by the pond, and more like Jacob in the wilderness.

Back to beginnings; again. 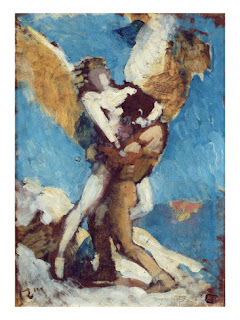 *And I forgot Richard Flory telling us U.S. Christianity is dead (at last!), so now we need to bury Caesar.  Or something.  Back to beginnings, indeed.