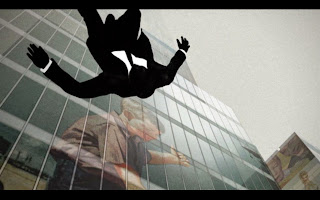 I'm just reacting here, because this is the only "review" of the final episode of "Mad Men" that I've read.  I watched the series religiously (!) when I had cable/satellite.  I haven't seen the last half-season yet because it won't be on Netflix for awhile.  That said, I can live with spoilers.  But I'm intrigued with what I read here.  It captures pretty well the decay of the earnestness of the '60's into a mushy "spirituality" that really had no core, no principles, no precepts, except to feel better about yourself:  the worst detritus of Romanticism, in short.  Apparently the TV series ended, in Auden's felicitous phrase from his elegy for W.B. Yeats, with the brokers yelling like beasts on the floor of the Bourse, and each character in the cell of him/her-self.  And maybe with a very penetrating truth about this all too American story (apologies for the length of this quote, but for it to make sense I have to put the important last two paragraphs of the review in context):

I left this finale believing myself to be disappointed in Don Draper, but I’m really disappointed with myself. Disappointed for this narrative of settling for the modern world—which, along with its many perks, like lower infant mortality and longer life expectancy, comes with a horrifying feeling of emptiness from time to time, as we all seem to strive to live an existence that is not great or searing but just okay, just fine, just good enough to get by. Most of us in the first world don’t go bed hungry anymore—but as Peggy observed to the Burger Chef executives, “you’re starving, and not just for dinner.” Don and Peggy and Joan and Sally can’t really flame out beautifully in “Mad Men” because they are modeled to be people just like we are people, and yes, it is disappointing. Some kind of conflagration, of either the body or the soul, would have been so much more cathartic, so much more satisfying. It would have given voice to the roiling emptiness within. But instead we just get scenes from one more day in the lives of these people. One more day is all any of us ever get, until the day we don’t.


One line from Coca-Cola’s official history of “I’d Like To Buy The World A Coke” made me laugh. Billy Davis, the music director for the Coke account, had a problem with the idea for the spot when it was pitched to him. He said: “Well, if I could do something for everybody in the world, it would not be to buy them a Coke… I’d buy everyone a home first and share with them in peace and love.” Backer, the creative director, responded with one of the most confident, full-of-shit lines of spin in history: “Okay, that sounds good. Let’s write that and I’ll show you how Coke fits right into the concept.”

The thing is—and maybe this is the whole point of “Mad Men,” from selling cancer sticks to selling world peace—advertising can be lovely, in its own way. Selling a thing and believing it often go hand in hand. “I’d Like To Buy The World A Coke” is a fantasy, but it’s a beautiful dream: loving families, world peace, multiculturalism, homes shared in peace and love. It’s just that sometimes having that dream and not being able to realize it can corrode you from the inside out. The almost-nameless man in group therapy who starts sobbing while articulating the awful loneliness inside of him describes his life as a failed attempt to feel love: “You spend your whole life thinking you’re not getting it. People aren’t giving it to you. Then you realize, they’re trying. And you don’t even know what it is.” Advertising is narrative designed to make you feel you need something more to feel complete. The result is that it makes hollow, grasping fools out of all of us.

And since I read this on Salon, I couldn't help thinking what sounds rather like a triumphalist thought (and I hate those, but):  What does atheism have to offer against this?  Is this all there is?  Materialism (which is what advertising sells) "that...makes hollow, grasping fools out of all of us"?