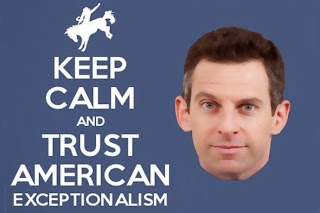 Mostly, I wanted an excuse to use this picture....

I should have paid a little more attention to the e-mail exchange between Chomsky and Harris.
For example, I caught the "good intentions" defense of America by Harris; what I missed was the moral superiority based on, you know, exceptionalism:

For Sam Harris, “not all cultures are at the same stage of moral development.” Yes, he admits, the U.S. has committed atrocities at a larger scale than many of our enemies, but we have higher moral standing because these were mistakes. Harris likens the U.S. to a “well-intentioned giant,” whose aims are good even if it occasionally blunders.

Yikes!  "Same state of moral development"?  What you mean "we," Kemosabe?

I'll leave the "thought experiment" Harris constructs from that premise for Chomsky to rebut (you can read it easily at the link).  I'm still stuck on this "some cultures are morally superior to others."  I knew modern-day atheists were still pretty much on the cutting edge of the 19th century.  I had no idea they were stuck on the bleeding edge of 19th century empire.

This is not a passing fancy with Harris; it is his raison d'être, indeed, it is his reason, period.

In The End of Faith, Sam Harris accuses Chomsky and other leftists of “moral blindness” towards the important differences between “the kind of force civilized democracies project in the world, warts and all, and the internecine violence [perpetuated by Muslim governments].” Harris argues that there is a qualitative moral difference between the U.S. and the Muslim world, which leftists like Chomsky cannot see.

Because, you know, we're at a different stage of moral development.  Can I just say, at the risk of invoking Godwin's Law, that this was the reasoning used by Nazi Germany to exterminate Jews, homosexuals, and any other classification of people they could come up with?

Because, really, it was.

I can understand why Harris' argument is appealing.  I can also understand why it sells books.  But even in America, popularity and profits should not equal moral authority.  Or good sense, for that matter.