The essence of American Liberalism 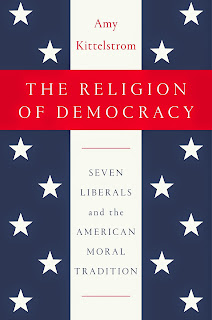 This is such a clear and cogent statement, it almost alone explains why we are still fighting the fights of the 19th century.

Well, in "popular discourse," anyway.  Even the most atheist of modern scholars and philosophers have long since moved on from the feeble position of Richard Dawkins (who doesn't know enough to be embarrassed by his ignorance):

Up to now the American Reformation was hard to see for two main reasons. The first is the very myth of orthodox American Christianity produced by the evangelical side of the debate, a useful fiction in a country with a sizable Protestant majority but a guarantee of religious freedom instead of an established religion. This myth, adopted by scholars and popular commentators alike, equates religion with Christianity, Christianity with supernatural belief, and Christian belief with a particular faith in the special saving grace of Jesus through his blameless death and glorious resurrection. This evangelical kernel of Christianity had certainly been part of the Puritan tradition— and of other American Protestant sects as well as Catholicism— but the revival movement of the eighteenth century separated this kernel from other beliefs and practices that had grown up with those traditions, delineating the evangelical doctrine starkly so that it became the essence of faith. The myth of orthodox American Christianity gave rise to a distinction between head and heart, or the intellect and the soul, making any departure from so-called orthodoxy appear as a falling away from religion, a decline from faith, a crisis, a move of revolt or rejection or outright warfare on religion that inexorably brings on secularization, which measures value by the merely natural or material rather than the ultimate or divine and is widely associated with modernity. Christians who deplore secularization and humanists who applaud it have both found this myth useful, but lifting the veil of orthodoxy from the actual complexity of American religious thought reveals that the liberals who departed from this alleged orthodoxy did so in fidelity to their Christian faith rather than in spite of it.  (emphasis mine)

This is a book I think I actually want to read.  I mean, if this doesn't sound like an objection to the stupidity of Dawkins and Coyne & Co., I really don't know what does:

Against those who believed they already knew what was right and pursued policies to reflect this fixed truth, liberals advocated for truths they recognized as provisional and incomplete, and they were committed to listening to contrary opinions for any possible truths the opposition might hold and working dialogically toward consensus.

Two subtle ironies surround the history of this religion of democracy. The first is that the liberal Christians who set its wheels in motion acquired a reputation for softening their religion into mere morality, as though to focus on ethics were to focus on something other than real religion. From the liberal point of view, virtue is the fruit by which true faith is known. This charge is a by-product of the myth of orthodox Protestant Christianity, made especially potent by what happened during the middle period of the American Reformation. When Romantic ideas about universal inner divinity arose amid an exploding literary canon that was globally inclusive for the first time, Christianity’s claims to exclusive truth started to look like hubris to some liberals. How could an open- minded moral agent be so sure a Hindu did not know God? Transcendentalists and others then left the Christian fold without really rejecting Christ. To the surprise of many faithful devotees of the American Reformation, liberal Christians started battling their own intellectual and cultural progeny, post- Christian religious liberals who discovered the divine not only in the Christian Bible but far beyond it. This post- Christian turn marked the end of the American Reformation and the beginning of the religion of democracy in which no tradition could boast unique revelation but all individuals bore unique inner divinity.


Sounds like the kind of kenosis Vattimo describes.  Close enough to make for a fruitful dialogue, at least.

Gonna have to check my local bookstore on Monday morning.*

I can't leave this out of at least a footnote:

Calvinism was not the sole form of "orthodox Protestant Christianity."  That was the Reformed stream; the other great stream was Lutheranism (and the related stream of the Episcopal Church, which is strictly neither Reformed nor Lutheran).  And even by the mid 19th century, the German Reformed and German Evangelical churches (at least) were bringing to America theologies that didn't depend on the Calvinism of the American Protestant majority (i.e, the Pilgrims and, by that time, the Baptists).   I'm not sure when the Lutherans became a major presence, but it may have been before the Evangelical and German Reformed churches got here.  There is a stream of Christianity which is not necessarily "liberal" but is certainly not grimly Calvinistic, and yet very orthodox Protestant Christianity.  The truth, as always, is messy.