And Bernie's not gonna take it anymore! 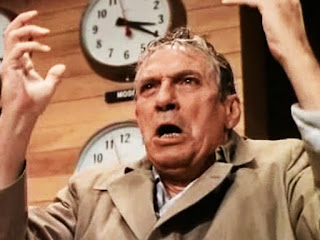 Somewhere in the Great Beyond, Paddy Chayefsky cleared his throat meaningfully.

“The American people are sick and tired of establishment politics and economics, and by the way, a little bit tired of corporate media as well,” Sanders told Maddow in an interview taped in Burlington, Vermont.

Maddow pressed Sanders for specifics on how he would change the media if he were president.

“What’s the solution to corporate media?” she asked.

“We have got to think of ways the Democratic party, for a start, starts funding the equivalent of Fox television,” Sanders answered.

Of course, MSNBC is a corporate media outlet that is widely seen as a Democratic version of Fox News because of the perceived sympathies of many of its political talk shows.

Sanders went on to argue that “pressure has got to be put on media” to cover policy issues like income inequality and poverty more heavily, instead of devoting attention to sensational campaign moments and the state of political horse races.

He then claimed that bringing that pressure to bear would be difficult, since corporate ownership makes it harder for news outlets to cover issues in a way that conflicts with the interests of top executives.

“MSNBC is owned by who?” Sanders asked.

“Comcast, our overlords,” Maddow responded with a chuckle.

“All right, Comcast is not one of the most popular corporations in America, right?” Sanders said.

“And I think the American people are going to have to say to NBC and ABC and CBS and CNN, ‘You know what, forget the political gossip. Politics is not a soap opera. Talk about the real damn issues facing this country.’”


I really have seen this movie.


Howard Beale ended up fronting a "reality show" before we had reality shows (damn but Chayefsky was prescient!).  And he was about as effective as Jerry Springer or Morton Downey, Jr.  And if you don't remember both of those names, my point stands as taken.  You can't lead the American horse to water, and you cannot make it think; at least not thoughts it is unwilling to think.  To imagine that CNN and NBC and all the others media outlets are somehow denying the American public the meaningful public discourse they want to have is to talk like an adolescent on the internet.  It's sheerest moonshine.  Consider Pacifica Radio, which fulfills every dream of discussing serious issues that Bernie Sanders could wish for.  Amy Goodman is barely identifiable as a public figure (she deserves more recognition), and most of Pacifica programming, after the one attempt at a takeover years ago now, has returned to music, and away from any meaningful content.   And still Pacifica struggles to stay on the air. Whither Air America?  Victim of a nefarious corporate conspiracy?  A delicate flower choked out by the weeds of Clear Channel (who is now failing badly)? Or just not able to attract that many listeners?

You can talk all you want about "the real damn issues facing this country."  What you can't do is make anybody listen.

I don't think Bernie has figured that out yet; which, at age 74, makes him a very sad figure, indeed.