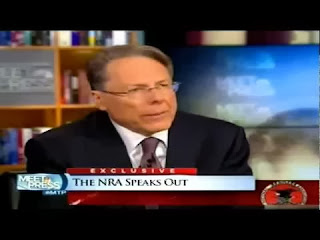 This is absolute madness.

This "argument" is madness.  This is insanity.  Yet even when he is allowed on TeeVee, nobody tells Wayne LaPierre to his face:  "You are insane.  Your words do not describe reality.  You make sounds that make no sense.  You speak gibberish and do evil."

To argue with this man is to countenance the Devil.   You don't "push back" against this man.  You simply call him evil.  You call him a fool, a madman, a jackass, a violence peddler, a monster, a killer, a merchant of death.  You get him on your forum so you can strip him naked and run him through the town square tarred and feathered.  You do not thank him for his time, you treat him like the pariah he should be.  You treat him like the gibbering idiot he is.  You denounce him.   You expose him.  You deride him.  You excoriate him.

Let's just go with the entirety of what Mr. LaPierre said to Mr. Gregory:

WAYNE LAPIERRE: No, the whole country, David, knows the problem is there weren't enough good guys with guns. When the good guys with guns got there, it stopped. I mean, what really happened here, the mental health situation in the country is in complete breakdown...David, you know, all the outrage this week the first two days, of the elite media and the politicians trying to stir this toward firearms; the outrage ought to be placed on an unprotected naval base; on a criminal justice system, in Chicago, that doesn't even enforce the federal gun laws (and we could dramatically cut violence); on a mental health system that is completely broken; on a check system that is a complete joke in terms of stopping the bad guys. And a criminal justice system in this country-- just this past week, because of budget collapse, they're releasing 23,000 people back to the streets in Los Angeles, a lot of them violent and a lot of them sex offenders. That's where the outrage of the American public is...Private sales between hunters, hunter to a hunter in another state, a farmer to a farmer shotgun, no, I don't believe you ought to be under the thumb of the federal government. But that's what's wrong with this town, David. Here we have a military base completely unprotected, we have a mental system that's completely broken down, they're trafficking in 13-year-old girls down the street, there's all kinds of drugs, all kinds of guns, and the priority of this town is, "Hey, do you think a hunter that sells a gun to a hunter in Kansas ought to have to be under the thumb of the federal government?" No...I'll tell you what the N.R.A.'s for: Interdict, incarcerate violent criminals. Get them off the street. Indict people that are having mental problems; get them into treatment. Enforce the federal gun laws. If there's a drug dealer with a gun in Chicago, 100% of the time federal law, Eric Holder, prosecute them. Fix the mental health system and let's get our fiscal house into order so that we can stop releasing the bad guys back to the street.

That, as they say, is some authentic frontier gibberish.  There isn't a lick of sense in it, or a rational order to it.