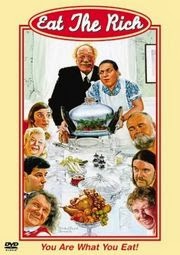 All proper human interactions are win-win; that’s why the parties decide to engage in them. It’s not the Henry Fords and Steve Jobs who exploit people. It’s the Al Capones and Bernie Madoffs. Voluntary trade, without force or fraud, is the exchange of value for value, to mutual benefit. In trade, both parties gain.

Each particular individual in the community who contributed to a man’s rise to wealth was paid at the time–either materially or, as in the case of parents and friends, spiritually. There is no debt to discharge. There is nothing to give back, because there was nothing taken away.

Well, maybe there is–in the other direction. The shoe is on the other foot. It is “the community” that should give back to the wealth-creators. It turns out that the 99% get far more benefit from the 1% than vice-versa. Ayn Rand developed the idea of “the pyramid of ability,” which John Galt sets forth in Atlas Shrugged:


You got your cheap crap from Wal-Mart!  What more do you want?!  And if they don't pay a living wage and don't work you on a full-time schedule so they can get richer, what's that to you?!  Be grateful you have a job at all, and KNEEL before the greatness of the rich! They're at the top of the pyramid YOU built by working for them or buying their crap!  Be grateful they supplied you with crap to buy and acknowledge their superiority!!!!

How are both parties gonna gain if you don't do that?

Of course, Henry Ford priced his cars so ordinary people could afford them, and paid his workers enough they could afford his cars, but still:  HE WAS RICH!  RESPECT HIS WEALTHINESS!!!!  (Not that Mr. Ford thought much of the way most of the Forbes 400 make their money).  And without the 99%, the 1% can't be the 1% at all.  But that's just the privilege of being a member of society.

Besides, Lloyd Blankfein or Mother Teresa:  who has done more for humanity?  Isn't it obvious?  Everybody knows the poors just "eat a bunch of turkey" at Thanksgiving and "run to the mall."  Thanks to Lloyd Blankfein, I'm sure!

*Okay, not that much shorter, but hey, it's me.