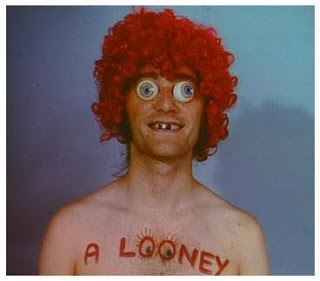 No, I don't know what it is, either.
Can you spot the problem here?

The men, Charles Branstrom, 27, and Ross Bauman, 22, ultimately were released without tickets or charges.
Branstrom recorded the confrontation with Appleton Police. About six minutes into the recording, one officer sees Branstrom's camera, confiscates it and attempts to turn it off — but stops only the video.

The device continues recording audio for about 45 minutes.
...
According to the recording:
The men are walking down the street when they see a police car's lights go on and they see officers approaching. As the officers order the men to put their hands against the wall, the police ask why they're carrying the guns that way.

"These are real AR-15s guys. I'll cover them both," says one officer, who levels his own weapon at the men as another officer begins questioning them.

Police ask if the men are headed to the farmers market.

"Yeah, we were just going to do some shopping," Branstrom says.

"Do you understand how that might create a disturbance if you're walking around with an AR-15 strapped to your back?" asks an officer.

"Yeah, I guess some people don't like guns," Branstrom replies.

Throughout the stop, both men appear polite and cooperative. Another officer orders that they be put in handcuffs and moved to separate squad cars.
....
The officers check the concealed-carry permits and run the serial numbers of the guns. One speaks with a prosecutor — most of the conversation is inaudible because of background noise — and eventually the men are released with their property.

One officer offers this parting comment: "I get what you guys are trying to do. ... But when you grow up a little bit and you're a parent and have kids at an event like this and you see someone walk through with guns strapped to their back, your first inclination is going to be, 'All right, what's this guy up to? Is my child going to be safe?'"

Branstrom, an Appleton truck mechanic, said he gets that argument, but said police just "provoked more fear and panic" the way the rolled up on him and Bauman.

"I'm still kind of shaken," he said. "I was one nervous twitch away from having a bullet put in me," he said.

For the life of me, I can't imagine why anybody in this situation was afraid bullets might start flying.

Truth IS a relationship.  And it's the breakdown of social communal relationships that is the general problem, methinks.