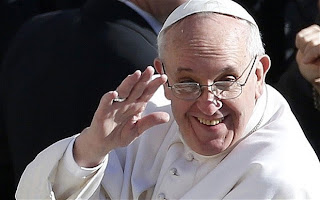 Again, I'm sure Pope Francis and I would disagree on details (church doctrine still insists on not recognizing gays and lesbians as holy people of God, for example), but I think he is exactly right just the same:


Pope Francis, in the first extensive interview of his six-month-old papacy, said that the Roman Catholic church had grown “obsessed” with preaching about abortion, gay marriage and contraception, and that he has chosen not to speak of those issues despite recriminations from some critics.

In remarkably blunt language, Francis sought to set a new tone for the church, saying it should be a “home for all” and not a “small chapel” focused on doctrine, orthodoxy and a limited agenda of moral teachings.

“It is not necessary to talk about these issues all the time,” the pope told the Rev. Antonio Spadaro, a fellow Jesuit and editor in chief of La Civiltà Cattolica, the Italian Jesuit journal whose content is routinely approved by the Vatican. “The dogmatic and moral teachings of the church are not all equivalent. The church’s pastoral ministry cannot be obsessed with the transmission of a disjointed multitude of doctrines to be imposed insistently.

“We have to find a new balance,” the pope continued, “otherwise even the moral edifice of the church is likely to fall like a house of cards, losing the freshness and fragrance of the Gospel.”

I would make the same complaints about my church, the United Church of Christ.  Cleveland (home of the head office, although in this case that's like saying the place the cat herder lives who tries to "lead" the UCC cats), is forever making pronouncements on social justice issues, pronouncements I usually agree with.  But those pronouncement usually have no pastoral ministry sense in them; they do not, in the Pope's felicitous phrase, present "the freshness and fragrance of the Gospel."

I recognize he isn't proclaiming a Catholic church as liberal or Protestant as the UCC.  As he says about the Church teachings on abortion, homosexuality, and contraception:

These teachings are “clear” to him as “a son of the church,” he said, but they have to be taught in a larger context. “The proclamation of the saving love of God comes before moral and religious imperatives.”

And I think that is exactly the point of true evangelism.

Or, in the words of my favorite E&R prayer:


It's all about the spirit, the life, and the power of God; which, in this world, is powerlessness, the greatest power of all.