The Next Great Awakening 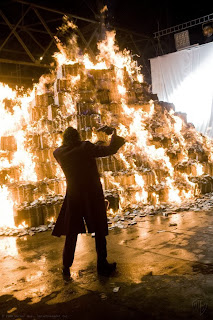 The nice thing about Greek tragedy is that there is the Clarifying Moment*; the moment when the tragic hero realizes his error, and his responsibility:

Ah me, this guilt can never be fixed on any other of mortal kind, for my acquittal! I, even I, was thy slayer, wretched that I am-I own the truth. Lead me away, O my servants, lead me hence with all speed, whose life is but as death!


Thy counsels are good, if there can be good with ills; briefest is best, when trouble is in our path.

Oh, let it come, let it appear, that fairest of fates for me, that brings my last day,-aye, best fate of all! Oh, let it come, that I may never look upon to-morrow's light.


These things are in the future; present tasks claim our care: the ordering of the future rests where it should rest.


All my desires, at least, were summed in that prayer.


Pray thou no more; for mortals have no escape from destined woe.

Some of the D.C. punditry is expecting that moment of clarification will come to the GOP before Hallowe'en; that at some point they will realize that Obama won't blink, that the country is not behind them, that government shutdowns and government defaults will not win them glory or save the Republic from the scourge of Obamacare or usher in the thousand years of peace.

And if life were a Greek tragedy, well...it could happen.

But the problem with Greek tragedy is that it isn't Shakespearean tragedy.  Justice is not done to the wicked even as the good die young (or old, in Lear's case).  In Greek tragedy justice is not at issue; responsibility is.  And the problems of the tragedy aren't resolved by death because "mortals have no escape from destined woe."

Which means it just gets worse, whatever happens next.

The GOP won't see the error of its ways; why should it?  Representatives are elected by districts, and so long as they aren't at electoral risk there, now they will risk the entire world.  But even there, they think their election is by everyone in the country.  Ted Cruz claims to represent 26 million Texans, but he won election with the votes of only 4.5 million of them.  That gives him a Senate seat, but it doesn't make him the spokesperson of every resident of Texas.  Once politicians were a bit more humble about their representation of the people.  Now they are megalomaniacs, and they and the people are one. This is hubris, yes; but not the kind that will be punished with a moment of clarity to end the play.

Their electoral victories make their desires the people's thoughts.  They are not tragic heroes, because they are not adults.  Adults accept responsibility for their errors, and know the entire world is not them; these politicians think everyone who doesn't think like them is wrong, and that they speak for everyone.  In that way they are children.  They are children playing with shotguns.  They are the thief in Alfred's story in "The Dark Knight," who just want to see the world burn.

But for them, the burning will be righteous.  And that's the problem.

*Not a recognized element of Greek tragedy per se, but the necessary instant of "recognition" where the tragic hero begins to accept responsibility