Are you flippin' it with me, Jesus? 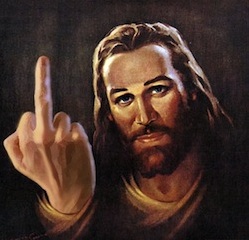 Usually I post the picture as decoration and/or additional commentary on the post; but what I really want to do this time is just talk about the picture.

To start with, it's the classic American Sunday School Jesus.  The one that prompted me to tell my congregations that Jesus probably looked like Yassir Arafat (when he was alive, I mean), not like this.

So it's Anglo Jesus, lookin' all Jesus-y, and so immediately recognizable (the softly wavy brown hair, the neatly trimmed beard, the suggestion of 1st century robes (the "robe" was the outer garment, the "coat" in the usual translation of Luke 6:29.  To give up your "cloak" was well was to give up the undergarment.  The Scholars Version, for clarity, says the command is to give up your shirt along with your coat.  Anyway, not something I think Angry Jesus here is set to do.), that we all know who this is without even being told.  Except we don't usually see Him making this quintessentially 20th century gesture.

Some might think, this image being so recognizable, that it is also sacrilegious.  We have no idea what Jesus actually looked like; there's no question the historical Jesus looked nothing like this; yet we are offended, because while this Jesus still has the soulful eyes we especially like to associate with Him, as well as the clearly Caucasian features, that upraised hand is just not right.

Well, of course it isn't.  That's the point, isn't it?  We don't want Jesus to look like us, we want him too look like Jesus, the better that we can revere him and then ignore him.  Maybe we should consider who Jesus is giving the finger to:  the poor?  the rich?  If you take Mary seriously, the latter could be true:


You don't want to be rich and hear those words directed at you.  In the Hebrew Scriptures we'd call that "prophecy."  But then we'd probably safely contain it as the relic of an "angry God" who calmed down when Jesus came along, and besides Christianity set aside all that prickly "Hebrew" stuff, so even the harshest words of the prophets don't apply to us anymore!

But if you take that at all seriously, if you recognize the core theme of justice in Mary's words, you recognize the connection to the Hebrew prophets.  And maybe you recognize what Marilynne Robinson was on about, that there was more than a bit of convenience in British atheism, especially among the ruling classes and their remnants (like Lord Russell).  Discard God and Jesus, and clear away all that concern with justice, except as justice serves those concerned about justice:  for them.  If Jesus said we had to level the playing field, he didn't mean replace those in charge:  he quite literally meant leave no one in charge.  Which is also of a piece with the Hebrew scriptures, if you quit looking for signs of an angry God and start looking for signs of justice.

But to those whose comfort rests on injustice, justice alone sounds like an angry god.

So who would Jesus flip off?

Malcolm Boyd published a famous set of prayers in 1965, Are You Running With Me, Jesus?  I used to have a copy, and sometimes I wish I still did.  The title prompted a bit of a controversy in those long-ago days, because it seemed a bit irreverent to ask the Creator of the Universe to run another busy day with you when of course you should be in attendance upon God.  But while there is a serious danger of reducing Jesus to a sidekick (or God to a banker always renewing your revolving loan; and I don't mean a spiritual one, either), Boyd's attitude was the right one:  our minds are focused on us first, and if we are going to encounter Jesus at all, we will do it from our daily lives.  Otherwise Jesus is just another plaster saint on the wall of a building we spend as little time in each week (or year) as possible; someone we can easily leave there, and just as easily ignore.

This picture is certainly no plaster saint.

Sinners in the hands of an angry God always calls to mind righteousness and justice; of a sort.  It calls to mind an angry God; but not an angry God looking like this.  Already this image takes us away from  Jonathan Edwards' notion of sinners deserving punishment because of justice, a justice averted only because of the "meer [sic] pleasure of God."  That justice, however, is an expression of God's anger:

They are now the objects of that very same anger and wrath of God that is expressed in the torments of hell: and the reason why they don’t go down to hell at each moment, is not because God, in whose power they are, is not then very angry with them; as angry as he is with many of those miserable creatures that he is now tormenting in hell, and do there feel and bear the fierceness of his wrath. Yea, God is a great deal more angry with great numbers that are now on earth, yea doubtless with many that are now in this congregation, that it may be are at ease and quiet, than he is with many of those that are now in the flames of hell.

He goes on like that for quite a bit.  That's the angry God we are accustomed to:  the God of torment and hellfire and damnation.  That angry God we find almost comforting, almost familiar.

This picture of an angry God, however, this picture of Jesus, we find distasteful.  Why?  Doesn't the anger produce the same result? Whether I am damned to the fiery pits of hell for all eternity, or cast into the darkness where there is wailing and gnashing of teeth, or Jesus just flips me off:  what is the difference?

Well, for one thing, it's hard not to take the last one personally.  Are you flippin' me off, Jesus?  Is easier to accept God's anger when it's described like this?

So that thus it is, that natural men are held in the hand of God over the pit of hell; they have deserved the fiery pit, and are already sentenced to it; and God is dreadfully provoked, his anger is as great towards them as to those that are actually suffering the executions of the fierceness of his wrath in hell, and they have done nothing in the least to appease or abate that anger, neither is God in the least bound by any promise to hold ‘em up one moment; the devil is waiting for them, hell is gaping for them, the flames gather and flash about them, and would fain lay hold on them, and swallow them up; the fire pent up in their own hearts is struggling to break out; and they have no interest in any mediator, there are no means within reach that can be any security to them. In short, they have no refuge, nothing to take hold of, all that preserves them every moment is the meer arbitrary will, and uncovenanted unobliged forbearance of an incensed God.

That anger sounds dreadful and righteous; the anger of Jesus in this picture just seems petulant and petty.  Too much like us, not enough like the judge of all humanity that we prefer to imagine; if an angry God we must imagine at all.

I'm not trying to box myself in to even a notion of an "angry God."  But Edwards' all too familiar notions are almost comfortable to us; this picture of Jesus is offensive.  And it's all about anger, and it's "proper expression."  Which brings us finally to the real question:  what is anger, and when is it "righteous"?  Which is to say, when is it right?

The first irony here is that Edwards' vision is no more grounded in Scripture than this picture of Jesus.  Edwards engages in the worst kind of proof-texting:  selecting a bit of verse here, a snatch of verse there, ignoring entirely the context of the passage, and using it all as an excuse to weave an image of God and hell and damnation and the devil that has no connection to Scripture whatsoever.  His central idea in the sermon is elaborated from church tradition and church doctrine, but it is no more valid a reading of Scripture than the vision of the end times presented in the Left Behind books (which contemporary history seems to have already left behind).  This image of Jesus is just as accurate.  It arises from a Greek (not Hebrew!) notion that God would be perfect, therefore Jesus would be a perfect human being, and being perfect he would look like:  a handsome genial white guy!

Let's face it, this Jesus could give Jon Hamm a run for his money.  How could Jesus not look like this?

So it's an offensive picture; but not, I suspect, offensive in the same way the God described by Jonathan Edwards is offensive.

His description is at least offensive to me.  The "angry" God I encounter in the Hebrew scriptures is not vengeful, he's disappointed.  Israel had a covenant, and they didn't hold up their end.  God doesn't damn Israel to hell; God leaves Israel to the fruits of their efforts.  And then God recalls Israel to the covenant, and calls Israel back out of Exile.  But God never abandons Israel (what is hell except the complete absence of God?  "Abandon all hope," Dante said; what is God, if not ultimate hope?).  The idea that God would abandon any portion of the Creation because of some abstract (and apparently more powerful than God) notion of justice (who deserves damnation simply be being born?) is offensive.

This picture of Jesus is offensive in a different way.  This very white, very 20th century version of Jesus, is a mirror.  This is what we want Jesus to look like; at least, if we look this this.  But the mirror now is too perfect:  it isn't even cracked, it is too exact.  This is Jesus reflecting us back to ourselves.  We are the ones who made this gesture.  We are the ones who promote this sentiment, especially in times of anger.  This is even a peculiarly American gesture; but then, it's a peculiarly American Jesus.