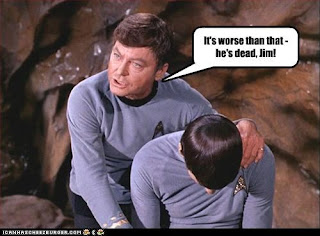 You get his wallet, I'll get his car keys.

I come at this topic because of a rather silly comment I responded to on another blog bright and early this morning.  It wasn't the comment per se so much as the insistence on "evidence" which is always equal to "Truth" that amused me.  But it ran me off into a topic I've mentioned before, at least to my students.

What, I like to ask them, is the difference between a sleeping body and a corpse? (it comes up in connection with that favorite Elizabethan meme of sleep being cousin to death). Or, one might more accurately put it, a comatose body and a corpse?  With the sleeping body we might still see enough animation to expect the sleeper to awake; but as Poe showed us with the 19th century obsession with "premature burial," distinguishing coma from corpse was once a tricky matter.  It's still, Wiki tells me, a rather lively controversy:

Research by Dr. Eelco Wijdicks on the depiction of comas in movies was published in Neurology in May 2006. Dr. Wijdicks studied 30 films (made between 1970 and 2004) that portrayed actors in prolonged comas, and he concluded that only two films accurately depicted the state of a coma victim and the agony of waiting for a patient to awaken: Reversal of Fortune (1990) and The Dreamlife of Angels (1998). The remaining 28 were criticized for portraying miraculous awakenings with no lasting side effects, unrealistic depictions of treatments and equipment required, and comatose patients remaining muscular and tanned.


Well, of course, Hollywood "deaths" are never terribly realistic, either.  Beautiful people don't waste away from cancer, turn gray as ash from chemo therapy or a heart attack, writhe in agony as a stroke ends their existence.  But that's not the real controversy:

For decades, medical personnel and others have fought, and continue to fight, to define the circumstances under which a patient is considered dead. Society places a lot of importance on the idea of “brain death” because most “industrialized countries have equated this with death of the individual”. However, according to Rady and coworkers, “human death is a singular phenomenon characterized by irreversible cessation of all vital functions (circulation, respiration, and consciousness)”. This means that death may be consisted of much more than just the brain’s inability to function. For example, although a patient may be “brain dead”, they may still be considered alive because they can still grow and even reproduce.


That's the interesting question:  not, when is death, but what is death?

It is, of course, the "irreversible cessation of all vital functions."  If the heart can be restarted quickly enough, or at all, you aren't dead.  If it can't, or there's too much delay, you're gone.

But why?  What is gone?  The soul?  The spirit?  The elan vital?  What's missing, and why can't we replace it?

There really isn't any difference between a corpse and a stone; neither will ever be animate (alive).  The only difference is, the corpse was once alive, and is not likely to last quite as long as the stone.  Not quite as long because one could reasonably argue that timber is the corpse of a tree, yet I've heard the teak benches placed in English public parks under the reign of Victoria are still in use.  Teak doesn't rot easily.

Still, stone outlasts wood; and yet stone and wood are equal objects in many ways, and wood can become stone (petrified forests).

So what is missing from a corpse?  What does it mean to say "irreversible cessation of all vital functions," except "I dunno.  It's dead."?  Is there a real difference between the two statements?  Why are "vital functions" necessary to "life," and why can't we restore them?  Why will electricity restart your heart, and then it won't?  What is missing that keeps the heart from pumping anymore?

It's a curious thing, but only that which is alive can produce that which is alive.  We cannot produce an embryo in a petri dish ("test tube babies") with dead cells; they must be "living".  But why?  What is the difference between dead cells and "live" ones, such that one reproduces and the other doesn't?  What vital functions go on at the cellular level of sperm and egg which are not present without this missing element?  What the heck is this missing element?

Contrary to popular belief, by the way, Mary Shelley didn't rely on electricity animate her monster; she relied on alchemy.  The life force was, and still is, a mystery.  We can run 1000 volts through a dead frog, or a dead human, and get the same result:  burned meat.  We won't get life, much less "restore" life.

"Restore" there is an interesting locution.  It's as if life were a substance one can replace into an empty container, the way one restores one's supply of oatmeal.  But life isn't a substance.  Still, it's the difference between animate and inanimate.  But the difference is:  one moves on its own, the other doesn't.

The difference between a corpse and a sleeping body (or a comatose patient, if you prefer) is that one will get up again, the other won't.  But why?  Because one is alive, the other is not; except that's no explanation, that's merely observation.  It's obvious, and yet it explains nothing.  To say it is a difference in condition, or in classification, or in anything, is simply to pile up words.  I can see the corpse won't move again; I can see the sleeper awake.  What I can't see is evidence explaining why one is not the other, except that "vital functions" are still sustained in the sleeper; but that tells me precisely nothing at all.  All you've said is "One is alive, the other isn't."

I don't raise this to bash "science" or to belittle the limited knowledge of people I run into on the internet who are always so desperate to belittle my thinking in order to embiggen their own; to me, this is a serious question.  Science does depend on its answer, God's existence is not proven or finally defeated based on the outcome, civilizations will not rise or fall on it, political power will not change hands.

Dead I can understand; dead means "without life."  But then, what does "alive" mean, besides just "animate"?  It clearly means more than that, otherwise my car is alive.  What is "life", and how do we know it?