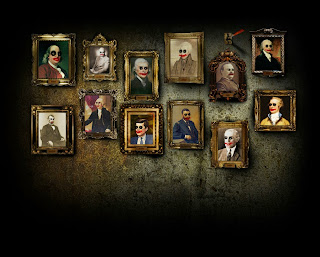 I think we're all jokers in this deck.

No, not voter fraud in Texas; in Minnesota:

Abbott, speaking at the Texas Tribune festival, said Minnesota Senator Al Franken won his seat, which was decided by a 312-vote margin, because of voter fraud and that his subsequent vote on the Affordable Care Act, commonly known as Obamacare, wouldn’t have been cast.

This, apparently, is a "thing," thought not that much of one.  There are always tedious conspiracy theories in American politics, most backed by no evidence but a strong assertion of "facts" (such as Sen. Ted Cruz's claims that a) the American people support the radical GOP position on Obamacare, and b) Obamacare is costing Americans jobs.  Cruz has no evidence either is true, but that doesn't stop him from claiming it every chance he gets.).  So it isn't the silly conspiracy theory that interests me; it's the appeal to stopping Obamacare coupled with defending the state's indefensible voter ID law that interests me, and the far flung claim that Al Franken won his office by fraud 5 years ago.  Something tells me that horse has done left the barn, and isn't of much interest to rural Texas voters (the GOP's base in Texas) anyway.

Abbott is running for Governor of Texas.  Wendy Davis hasn't formally announced that she's running, but the smart money always says the Democrats in Texas need a good candidate to have a chance of winning.  And while Greg Abbott is railing about Obamacare and vote fraud in Minnesota (the hell?), Davis may actually make inroads:

“Those aren’t the things Texans want to hear us talking about,” Davis said of “divisive” issues. “What they care about is public education. Can their child go to college? Is there a path for their child’s future? … A path to having a good job, are they going to have adequate health care, these are things that really matter to people.”

Davis's trick will be voter turnout.  Texas is trending blue (which yes, scares Republicans), but it won't get there without voter turnout, especially in the cities.   If Wendy Davis can counter Greg Abbott's mad rants about Obamacare and voter fraud  in Minnesota (huh? and lorrie nose what else), things may get interesting in November of next year.

On the other hand, Ann Richards won largely because Clayton Williams refused to shake her hand at a debate (you could look it up).  Wendy Davis could win if she could mobilize enough minority (who are actually the majority in Texas, or nearly so) and young voters to turn out (which is why Abbott is vociferously defending Texas's voter ID law).

Because I really don't think this position wins, especially if Democrats (as Davis will have to do in Texas, to have a prayer) run hard against it:

It went mostly unremarked on at the time, but think about this: Cruz was demanding that a law be defunded because of an Internet petition. The 2012 election results, and their 64 million votes for Barack Obama, were moot, thanks to the fractional number of conservatives who'd gone online after seeing a Cruz/SCF TV ad.


There's a lot of this going around. "The reason this debt limit fight is different is, we don't have an election around the corner where we feel we are going to win and fix it ourselves," said Paul Ryan in a Wall Street Journal interview. "We are stuck with this government another three years." In an interview with Josh Green, Jim DeMint argued that the 2012 election denied Republicans a real Obamacare referendum because Mitt Romney was compromised on the issue. The goalposts are being nudged—Republicans want to argue that the president, re-elected 10 months ago, lacks the consent of the governed because of new, nonelectoral factors. It would sound weird in any context; it sounds weird now.

Read that again:  "....we don't have an election around the corner where we feel we are going to win and fix it ourselves."  Having lost the last election, the right wing must have power anyway because their cause is just.  Can't let a little thing like the democratic process stand in the way.  Nor can they let it create situations, like Obamacare, that they don't like.

Power is slipping away from the hard-right in this country, and they WILL NOT HAVE IT!  This isn't just fear of a brown planet (although voter ID is certainly that, especially in Texas), it's fear of a non-Tea Party country.

But if Davis takes a leaf from Obama 2008, and runs on not being divisive, not by declaring herself "a uniter, not a divider" (or a ruler, not a protractor), but by talking about issues that matter to ordinary people, she might actually get them to turn out and vote.

I don't think anybody besides rabid Texas GOPers really cares whether or not Al Franken gave us Obamacare.