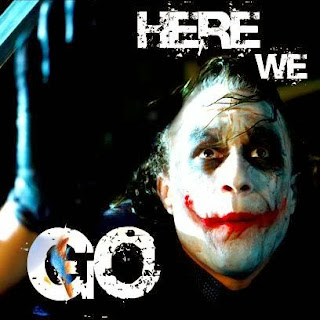 I have immersed myself (more than is good for me!) in the stories of imminent gov't shutdown and not quite as imminent destruction of the world economy by defaulting on our national debt, and I have reached one conclusion I am quite sure is sound:

John Boehner is not good at his job.

Rachel Maddow is right:  Boehner is not good at his job.  There is nothing keeping Boehner from bringing a "clean" CR to the floor of the House right now and getting enough votes to pass it on to the Senate.  Boehner doesn't have to get the votes of every Republican, or honor the incredibly stupid "Hastert Rule" (which isn't, like say Rule 22 of the Senate which kept Ted Cruz from truly offering a filibuster, a "rule" of the House).   He could also tell the crazies to take a flying leap and pass a debt ceiling raise, again with the help of House Democrats.  He could do it because it is the right thing to do.  He could do it because not doing so is sheer insanity.  He could do it because he doesn't really have to worry about losing his speakership.

Estimates are, based on what I just heard on NPR, that some 30-60 House Republicans are die hard Tea Party fanatics listening now to Ted Cruz, proclaiming "Let's roll!" a la 9/11 (although that analogy is completely backwards!  But then, so is John Culberson.  In the late Ms. Ivins' most pithy phrase, if that man were any dumber we'd have to water him and turn him toward the light twice a day), and ready to bring on Ragnarok if that's what it takes to get their way.  That's about 1/7th of the House, at best.  That isn't enough votes in the House to depose Boehner.  If the Dems wanted to give him a hand, say, in exchange for making the trains run on time and the House actually function, they could back Boehner in a challenge vote and let him keep his job.  The GOP might not like it, but what are they gonna do?  Run somebody against Boehner in 2014?

At best.  In the meantime, the economy doesn't get the props knocked out from under it, government employees don't miss a paycheck most of them sorely need, and the rump of the GOP is sent back into the wilderness to howl and gnash their teeth ineffectively.

There is no reason for this not to happen; except that John Boehner is really bad at his job.

Let us pause for a moment, and consider the question:  how crazy is this minority?  This crazy:

Many believe that the government shutdown of 1995 either didn't hurt Republicans politically or only hurt Republicans because they gave in rather than standing firm. Some also believe that the supposedly catastrophic consequences of hitting the debt ceiling are overblown, like Representative John Fleming of Louisiana, who recently told Politico, "Technically, it’s not possible to default," and if the debt ceiling is reached, "nothing happens." (Confronted with economists' predictions of large-scale catastrophe, Fleming told the New York Times, "Economists, what have they been doing? They make all sorts of predictions. Many times they're wrong.")

But wait!  It gets worse!


To their opponents, they appear unreasonable, but what they really are is very, very sincere: They truly believe that, by committing to do anything to block a law they see as disastrous, they're standing up for what's right. That's not going to change because the Republican Party's poll numbers, already in the toilet, slip a little more, or because their constituents complain about closures of national parks. The Republicans who care about those things are already willing to pass government funding and debt-ceiling bills. But there aren't 218 of them.


But there's the problem:  there don't have to be 218 of "them."  There are Democrats in the House, and together with the non-insane Republicans, they could run the House, reach compromises, and get something done that doesn't come straight out of a paranoid delusion.  Sincerity be damned, the insane minority is still a minority.

The Speaker of the House is the Speaker of the HOUSE.  Not the majority party in the House, not the 30-60 GOP members of the house who hear Ted Cruz in their fillings; the entire House of Representatives.  It is a position once considered so central to constitutional governance it was placed (and still is) 3rd in line to the Presidency in matters of immediate succession.  John Boehner doesn't fill the office as if he were the third most important person in the government.  He shrinks in it, as if his very life depended on the goodwill of Marsha Blackburn and Louie Gohmert.  His job is not to placate the Tea Party, it is to govern one-half of one-third of the U.S. government.  That is why the Speaker's position is third in line to the Presidency.

And that is why John Boehner is really, really bad at his job.  He's not doing it at all.