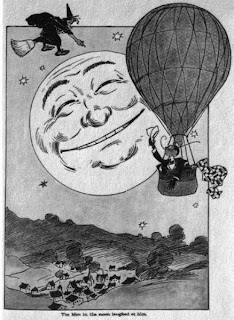 Which explains why he's so intimidating

Cruz argued that Americans were historically never ones to accept defeat, whether it be standing up the Great Britain during the Revolutionary War, Nazi Germany in World War II, or the Soviet Union during the Space Race of the 20th century.

"So we get to Obamacare," Cruz said. "What do all those voices say? Can't be stopped, you can't win. Cannot defund it. Mr. President, by any measure, Obamacare is a far less intimidating foe than those that I have discussed, with the possible exception of the moon. The moon might be as intimidating as Obamacare."

If you go to the 1940s, Nazi Germany," Cruz said. "Look, we saw in Britain, Neville Chamberlain, who told the British people, 'Accept the Nazis. Yes, they'll dominate the continent of Europe but that's not our problem. Let's appease them. Why? Because it can't be done. We can't possibly stand against them.'"


Cruz has vowed to talk as long as he can stand.  Which may be literally true, but it won't be a Jimmy Stewart style dramatic moment.  He can only talk until the Senate votes for cloture, and under the rules that only has to be a simple majority vote, not a 60 vote supermajority. *

One has to wonder:  what if the rules also required Cruz to speak without references to Nazis, World War II, or John Wayne, that war's greatest cinematic hero?  What if the rules required him to stay within the last 50 years of American history for his analogies, something more within the living memory of the majority of the country?  Would he have to be silent?

Just keep telling yourself:  this is Ted Cruz displaying his political acumen to the country.  And he's the smartest man in the room; just ask him.

And pass the popcorn, will ya?


“There will be no filibuster today,” Reid said on the Senate floor. “Filibusters stop people from voting, and we are going to vote tomorrow. Under the rules no one can stop that.”

“We’re going to vote tomorrow regardless of what anyone says or does today, unless it’s a consent agreement to collapse the time,” Reid said.

Reid means they could vote today; but the Senate will vote tomorrow.

Cruz may win among the electorate in Texas; but otherwise, stick a fork in 'im, he's done.  I mean, really.