Oh, that you would rend this keyboard 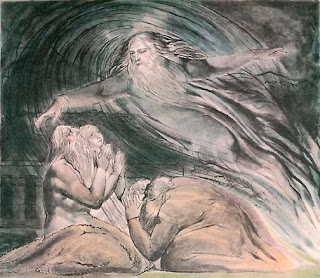 Sorry, I think I left my keys over there. Won't be a minute...

and make me step away from it!

Something I  read over the weekend has prompted me to examine again the issue of the "proof of God's existence."  I can't find it now but the concept is a perennial chestnut, so here goes:

The Gospel According to John, Chapter 12:

Jesus replied, “The hour has come for the Son of Man to be glorified. Very truly I tell you, unless a kernel of wheat falls to the ground and dies, it remains only a single seed. But if it dies, it produces many seeds. Anyone who loves their life will lose it, while anyone who hates their life in this world will keep it for eternal life. Whoever serves me must follow me; and where I am, my servant also will be. My Father will honor the one who serves me.

“Now my soul is troubled, and what shall I say? ‘Father, save me from this hour’? No, it was for this very reason I came to this hour.Father, glorify your name!”

Then a voice came from heaven, “I have glorified it, and will glorify it again.” The crowd that was there and heard it said it had thundered; others said an angel had spoken to him.
Jesus said, This voice was for your benefit, not mine.

Oh, that you would rend the heavens and come down,
that the mountains would tremble before you!
2 As when fire sets twigs ablaze
and causes water to boil,
come down to make your name known to your enemies
and cause the nations to quake before you!
3 For when you did awesome things that we did not expect,
you came down, and the mountains trembled before you.
4 Since ancient times no one has heard,
no ear has perceived,
no eye has seen any God besides you,
who acts on behalf of those who wait for him.
Exodus 19:


On the morning of the third day there was thunder and lightning, with a thick cloud over the mountain, and a very loud trumpet blast. Everyone in the camp trembled. Then Moses led the people out of the camp to meet with God, and they stood at the foot of the mountain. Mount Sinai was covered with smoke, because the cloud descended on it in fire. The smoke billowed up from it like smoke from a furnace, and the whole mountain trembled violently. As the sound of the trumpet grew louder and louder, Moses spoke and the voice of God answered him.

When the people saw the thunder and lightning and heard the trumpet and saw the mountain in smoke, they trembled with fear. They stayed at a distance and said to Moses, “Speak to us yourself and we will listen. But do not have God speak to us or we will die.”

So, moving from bottom to top, when people accepted the existence of God, they really wanted God to keep God's distance, and they knew God's presence as theophany (thunder and lightning).  Or they wished God would produce some thunder and lightning because, you know, prove it to them non-believers!  Or they heard the thunder, and weren't sure what it was, even though it was solely for their benefit.


And things are so much different now?


If God's existence were established as firmly as the keyboard my fingers are dancing over...oh, wait, that's the wrong use of the concept.  Category error, sorry.  Let me start again.


If God's existence were established as firmly as my own existence...oh, wait, I can't do that, either.  If I don't exist, the proof is pointless.  If I do exist, the proof is not evident.  I can prove my identity:  that I am the person named on my driver's license (if it isn't a fake), that I'm the person named on the diplomas and certificates and licenses on my wall (if they aren't fakes), but I could be Don Draper or Dick Whitman and still exist; except you might say you don't really know who I am.   But could I prove my existence?  I don't know how to do that.


It is generally a difficult matter to want to demonstrate that something exists--worse still, for the brave souls who venture to do it, the difficulty is of such a kind that fame by no means awaits those who are preoccupied with it. The whole process of demonstration continually becomes something entirely different, becomes an expanded concluding development of what I conclude from having presupposed that the object of investigation exists. Therefore in the world of thought, I never reason in conclusion to existence, but I reason in conclusion from existence. For example, I do not demonstrate that a stone exists but that something which exists is a stone. The court of law does not demonstrate that a criminal exists but that the accused, who indeed does exist, is a criminal. Whether one wants to call existence an accessorium or the eternal prius, it can never be demonstrated.

Yeah, yeah, yeah, back to Johannes Climacus again, but how do you get away from him when this is the topic for discussion?  The real question is:  if I am going to prove the existence of a person, I first have to identify what existence is.  If I cannot reason from conclusion to existence (that, by the way, is the form of argument Socrates used to establish the existence of the soul; if you reject that, what form is available to prove your own existence?), but must reason from existence to conclusion, then I have to presuppose existence, or do without it altogether.

Either way, I end up unable to prove anything about existence.  At most, we wind up here:

If, however, I interpret the expression "to demonstrate the existence of the god" to mean that I want to demonstrate that the unknown, which exists, is the god, than I do not express myself very felicitously, for then I demonstrate nothing, least of all an existence, but I develop the definiteness of a concept.

My existence is not a concept merely, but a reality.  How do I prove it, however?  I am known; or at least knowable.  As Climacus points out, God is the unknown (to the philosopher; to the non-believer); to demonstrate anything about that is to develop the definiteness of a concept.  But concepts can never be definite; if there's anything in human history that has been established, it is that.

So what does this business of the "proof of God's existence" have to do with anything?  If God's existence could be established beyond doubt or question (a fictional occurrence, I grant you), we would still face the situation of John 12, where some hear the voice of an angel, some hear thunder, and no one realizes, as the narrator says, that it is the voice of God.  God speaks to Moses but the people of Israel hear thunder and see a cloud shot through with lightning.  Isaiah wants God to make a demonstration that will convince people even in a day when we think everyone was convinced, and yet God declines to do so.

The entire question is a rubbish argument, a 19th century holdover still resting on the idea that without God humanity cannot be moral or even behave itself, and the God required for that is the Cosmic Thunderer who will smite the unbeliever and the immoral actor, even though the God of the Hebrew Scriptures never smote one unbeliever or one immoral actor, even among the Israelis at the time of the Exile.  This is why atheists get so worked up about moral systems that don't require a deity to make the systems moral; they are still fighting the 19th century fight while everyone has moved on into the 21st century.  Does God exist?  It isn't even a serious question.  Does it matter, is the only legitimate answer.  If God did exist, would you live your life any differently?

Depends on the nature of this God you think exists, doesn't it?  If you think God could only exist as Cosmic Punisher waiting to smack you down for failing to mind your moral "p's" and "q's", then I'd say no, God does not exist.  Not that God.  Does a God exist who wants only to save you from hellfire and damnation?  No, I'd say that God does not exist, either. Does God exist who wants to be in relationship with you, because truth is a relationship?  Yes, I think that God does exist.  Doesn't say much about the nature of God, but it's a beginning, and it's an improvement on those other concepts.  There are several Gods of human conception; well, they all are, aren't they?  What else could the conception of God be, except human?  If God was wholly of inhuman conception, we couldn't begin to conceive God at all; so that limitation is hardly the silver bullet that slays the werewolf so many atheists think it must be.  But there are several Gods of human conception, and I suppose we could argue over which exist, and which don't.

But I'm far more interested (though you wouldn't know it, would you, from how I go on) in the more important question:  how should we then live?  And the "we" is more and more the important word in that question.  Because truth is a relationship; which means truth involves "we."

Which is funny, because there's nothing empirical about love, yet we've devoted whole industries to it, reshaped lives because of it, created art works in praise of it; and while no one can establish it empirically, I've yet to meet anyone who is taken seriously for doubting its existence.