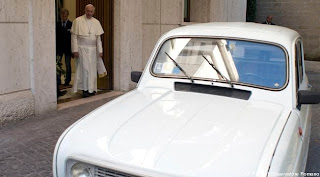 Just because the Pope driving stick makes me so happy.

Of course I wish he'd gotten to the part about truth being a relationship, but still, this is some good stuff:

In a column you wrote for the Huffington Post in February, after Benedict resigned, you proposed an ideal pope—one who emphasizes universality and good works—figuring a guy like that would never get the job. But then he sort of did, right?
I continue to be pleased with what Francis is talking about and his openness—despite papal authorities’ attempts to retract his statements [laughs]. He’s offering very universal ideas—not closing the door and saying you have to be a Catholic in order for good things to happen. This is the kind of world leader that we need in a position of power that the pope has if we want hope for a more universal community.
... But people assume atheists are rooting for the Church to fail. Is there a way for atheism and organized religion to be strengthened simultaneously or is a zero-sum game? Oh, I definitely see it as an opportunity for both sides to grow in a positive direction. I think atheists are a little naïve if they think that the best solution is to convert everybody to atheisms. That’s not going to happen any time soon. This is the world we live in. But we have to find ways to nurture the more progressive, more open-minded people willing to reason and re-evaluate positions in churches. We should encourage that to happen. Churches do revise their opinions from time to time. Instead of criticizing them for not being true to their faith—which we don’t agree with anyway—we should encourage them.

Of course atheists are naive if they think they are going to convert everybody to atheism.  But it's a forgivable naivete, long as I'm in a charitable mood and all (The Pope drives stick!).  I figured as a pastor my task was at least to try to get my congregation to be even a bit more Christian than they wanted to be.  I found out I was quite wrong in that, at least according to my congregations; so it's probably just as well I'm no longer in ministry.  Even nurturing "the more progressive, more open-minded people willing to reason and re-evaluate positions in churches" ain't, of course, exactly what Mr. Speckhardt imagines it to be (there are so many shades and schools and branches of positions and minds and people in so many different churches, to even speak so generally of just the Roman Catholic church is an overreach), but I get the drift, and it's not necessarily a bad one.

Probably better to say there are matters upon which even atheists and religious can agree to disagree (see, especially, nuns on buses or death row, and monks in monasteries writing books or just leading lives; I have a high regard for such people, and they tend not to be either evangelistic or overly concerned with non-believers because identity isn't a thing just formed by others).  Mr. Speckhardt is concerned that the Pope said "that God’s mercy has no limits if you go to him with a sincere and contrite heart," but I see that from the Pope's point of view, too, and wonder how else a committed Christian could put it.

And if we can at least have a dialogue, it can't be all bad, can it?  Even if the Pope doesn't really speak for me, I can at least appreciate what he's doing, and how people are responding.

And especially how he's showing, rather than just telling, that truth is a relationship.  As Ezra Pound said to Walt Whitman:  "Let there be a commerce between us."