Hope is not a plan 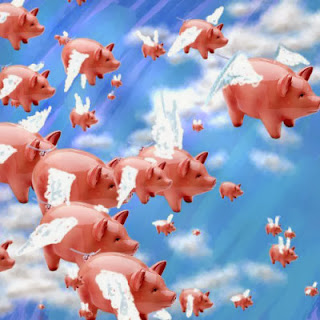 Which fly into your home and turn themselves into BLT's!

Once again, coming at this through Charlie Pierce, I have to wonder why the estimable Mr. Pierce doesn't read all the way through what he cites approvingly, and doesn't at least ask the obvious question:  "Does anybody really believe the House GOP is going to finally stop chasing cars if they catch one?"

Our only hope of avoiding this fiasco is to go ahead and have the shutdown, which will allow the public to completely repudiate the GOP before the debt-ceiling comes due. At that point, Boehner will be able to raise the debt ceiling with far less angst, having demonstrated to his colleagues how isolated they are politically.

The argument there is, the Democrats have signalled they will get a CR passed in the House (if Boehner will ignore the "Hastert Rule" and give Dems what they want), but that will set up the House GOP to declare "NO!" to raising the debt ceiling in October, which of course would be a terrible thing.  And the only way to avoid that terrible thing is to give let them catch the car now, and realize they didn't really want the car in the first place.

In other words, the Tea Party will suddenly get reasonable.  They'll give up their 3 year pursuit to end Obamacare because Obamacare will end life as we know it.  They'll give up their demand that Obama admit he's a Muslim born in Kenya who hates whites and wants to turn America into a Socialist hellhole.  And they will also realize Obama won the last election on the issue of the Affordable Care Act, and maybe just because they were all re-elected doesn't mean they get their Wish List, and bi-partisanship will return to the land.

Oh, and fairies, too; for everybody.  Just because we'll all have seen the light.

Why does the White House want to do this?

The White House seems to think that helping Boehner avoid a shutdown will buy it some good will.


Which, of course, is crazy.  You'll never buy good will with the House GOP until you've proven to them that what they want won't work.  And how do you do that?  By giving them what they want.

Oh, and waiting until 2014, when they get voted out of office.  If Americans remember what happened in 2013; and if the whole thing can be connected to Newt Gingrich throwing a snit fit because he had to exit the rear ramp on Air Force One.

We are talking about people who think guns are just like spoons, and the "grass roots" made Obama buckle on getting even a modest gun control law past a Senate that voted against it (No, don't try to make sense of that).  And these people were just elected or re-elected.  Give them what they want and when it doesn't work, it just proves to them they need more of what they want.

You could smack these people between the eyes with a two by four, and the best you'd get is their attention.  Maybe the better plan is just to get enough Dems and rational Republicans in the House to vote not to destroy either the U.S. Government or the world economy.

How does that sound?