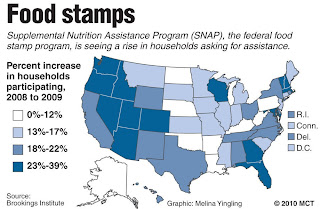 Maybe a few cruise missiles would make them poors git a job!

Shamelessly outsourcing from Charlie Pierce again today, but I wanted to put some numbers to these numbers:

One of the high-ranking Hill aides -- a Senate Democratic appropriator -- told The Huffington Post that "the overseas contingency operations fund is likely the place where this stuff will come from." That fund, which exists to support combat operations abroad and is exempted from the DOD's baseline budget proposal, stood at $86.5 billion in fiscal year 2013. The DOD submitted a request of $79.4 billion for FY 2014 while asking lawmakers to allow the Pentagon to "reprogram" $9.6 billion in FY13 funds. The reduction in the budget request this year is owed in large part to a reduction in U.S. troops in Afghanistan.


If you look up the proposed cuts to the food stamp program, you'll get slightly different numbers depending on who's reporting.  MSNBC's numbers are for the next decade, and the cut that was rejected recently was one of $20.5 billion over 10 years.  However, some members of the GOP think that isn't deep enough; they want cuts to be more like $125 billion. The Senate, by the way, just wants to cut $4 billion.

Turn that into annual numbers, it amounts to $5 billion for 2014, and $6 billion more across 2015-2016.  But those numbers, to be clear, are already in the pipeline.  Those cuts are scheduled to happen, as of November 2013, whether Congress cuts any more or not.  That cut means each recipient of SNAP aid will get about $1.40 per meal.  The GOP wants to go well beyond that. By the way, good luck buying crab legs with that.

The Pentagon, meanwhile, has basically an $80 billion dollar slush fund to pay for spent cruise missiles that have to be lobbed into Syria to teach the world we mean it when we say gas as a weapon of war is bad. And if we need to replenish that?  Well, sure; it's the price of freedom, right?

I stand with Mr. Pierce:

This country's head is so far up its ass if it sneezed, it would rupture a kidney.