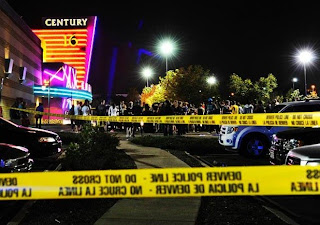 A Quinnipiac poll released last month found that 82 percent of Colorado voters supported expanded background checks for gun sales. But respondents were split down the middle on the 15-round magazine limit.

Also, the NRA wanted to recall 4 Colorado legislators; in the end, they only got the signatures sufficient to recall two of them.  Then there's the matter of the vote itself.  Colorado law changed before this recall election, and that change ended up affecting the ability to mail ballots to voters.


“I know what this decision means,” [State District Judge Robert] McGahey told the court as he issued the ruling around 7 p.m. Monday night, alluding to concerns from county clerks of escalating election costs and from Democrats who worried that the loss of mail ballots, which can’t be printed and mailed to voters in time if candidate signatures are validated so late, will lower voter turnout.

“I wish I didn’t have to make this decision, but I do,” McGahey said. “The constitution can’t be ignored.”

The judge found provisions of the law unrelated to mail-in ballots conflicted with the Colorado Constitution, and apparently he couldn't separate valid from invalid provisions in the statute.  Count that error to the Colorado Legislature.

But as the recall fight reaches an end, several Democrats working on the ground told The Huffington Post that if either Morse or Giron is defeated, it will be because their opponents were able to suppress voter turnout by making it difficult for constituents to cast their ballots. Turnout is typically low in recall elections, but one Democratic official estimated turnout of less than 15 percent across both counties.

"That's just astronomically low," the official said. "It's a race made up of an endless number of things that will just confuse voters and have an effect on the election itself."

And it may have been worse:

A get-out-the-vote canvasser for Giron, who requested anonymity out of safety concerns, said gun rights activists also engaged in "extreme voter intimidation" at polling centers in Pueblo on Tuesday.

"We had to call the police on a van of four huge guys staking out our staging location," the canvasser told HuffPost. "Volunteers are being followed, threatened, having their pictures taken and yelled at. We're now being told that it's bad enough to call 911 immediately."

And it may not even have been all about guns:

Indeed, the Koch brothers' involvement had little to do with guns, and AFP primarily focused its attacks against Morse on other issues that made him a vulnerable target in his conservative-leaning district. The group distributed fliers and doorhangers likening Morse to Bloomberg on virtually every issue except guns, instead concentrating on issues like taxes and health care.

One coalition of Colorado Springs law enforcement officials even took advantage of the recall effort to go after Morse for touting his experience as a former police officer in his campaign ads. The group endorsed Morse's recall, citing its opposition to his votes on sentencing for convicted criminals and legislation he sponsored to soften prison terms and limit the number of people who could be incarcerated in state prisons.


So the people who were motivated to recall these two State Senators turned out , but not necessarily because of the NRA;  and the rest of the state was largely "Meh!"  Or confused because they couldn't mail in a ballot; or they were actively intimidated at the polling place.

And yet:  so far as I know, the Colorado gun law is still the law.  One of the recalled Senators was on NPR this morning, saying it was worth losing his public office over.  Maybe instead of bemoaning the reach of the NRA (which wasn't that powerful, and hasn't repealed the law yet), we should praise that Senator for his convictions, and encourage similar convictions in more politicians.

And besides, 82% of the people in Colorado don't have a serious problem with this law, which is still the law.  As TPM noted the other day, this could actually work against the NRA's interests.

This cloud may yet have a silver lining.