Since I have to pick up the slack, let me do it with humor: 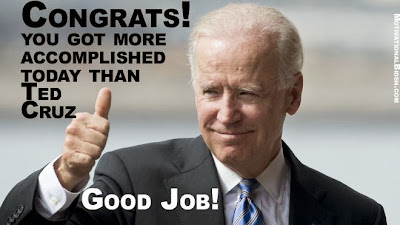 
Especially since Ted Cruz can't resist WWII metaphors.  He was implicitly Churchill against the Neville Chamberlain appeasers because Obamacare is like...."Hitler health-care exchanges?"  Like Jon Stewart, I lost the thread of that metaphor.

And I don't even want to know what this one is about:

Cruz ended his failibuster by thanking the Senate staff for having “endured this Bataan death march,”

I guess it's okay since most of the survivors of the Bataan death march are now safely dead, and so don't mind their horror being used to make light of 20 hours of pointless blather in an air conditioned room where people had to be because it is their job, which is kinda sorta somehow like being a prisoner of war.

Anyway, realize that if you never used such a gawdawful metaphor in your life, you've accomplished more than Ted Cruz.  Good job!