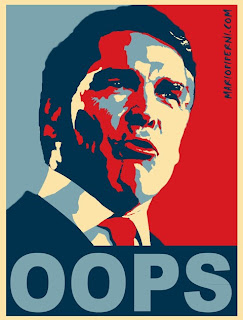 Closest that clown is ever gonna get....

The only problem with this:


Wallace B. Jefferson, the chief justice since 2004 and a relative moderate by Texas standards, stepped down earlier this year, which gave Governor Rick Perry a chance to fill the vacancy.

Perry appointed Nathan Hecht, the subject of Toomey's article in the New Yorker, which in turn is the reason Mr. Pierce wrote his blog post.   If we didn't elect our judges, governors like Perry would appoint 'em.  And I wouldn't trust the Lege as far as I could throw it to impeach judges appointed for life (the only way to get around people like Perry being in office for 12 years and having the run of the place), or resisting impeaching judges they just didn't like.

I don't know what the solution is, to be honest.  But the Supreme Court has been radically conservative since before Nathan Hecht was an Associate Justice, and when Rick Perry was still Agriculture Commissioner.

My only comfort is that it won't do a thing for Perry's GOP Presidential nominee chances.  He doesn't have any.