Except he doesn't have the (memory) charms.... 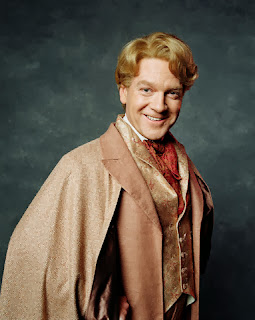 Am I the only one who sees the resemblance?

Maybe it's because I was over there last week, but Cruz's effort reminds me of nothing more than the political aftermath of the Easter Rising in Ireland in 1916 which, as a military action, looked as doomed and useless as Cruz's extended speech will look as soon as the Senate votes through whatever Harry Reid comes up with in the next couple of days. In Ireland, after all the drumhead courts-martial and the summary executions, which succeeded only in turning Irish political opinion almost 180 degrees and permanently in favor of the Rising, in the elections of 1918, Sinn Fein, the political entity that arose from the Rising, won 73 of Ireland's 105 seats in the British Parliament. Those elected then refused to go to London, and they formed themselves into Dail Eireann, the Irish parliament, and declared themselves the elected representatives of the Irish Republic declared from the steps of the General Post Office two years earlier. In doing so, they declared themselves loyal to no institutions but their own, no government but their own. In Neil Jordan's movie Michael Collins, Jordan has the imprisoned Eamon de Valera explain this in a letter to Collins as a strategy of "defeating the British Empire by ignoring it."


Yeah, and all the people who don't want to defund Obamacare are Nazi Appeasers, while Cruz is Winston Churchill.  Maybe Churchill is the more apt analogy, because events finally proved Churchill right about Germany, but as soon as that war was over, so was Churchill's career. And Ted Cruz is not warning us about another Nazi Germany, much as he'd like to think he is.

There is a reason the Vietnamese won the Vietnam War, and it's the same reason the Irish formed the Dail Eireann; it's even the same reason the colonists won the War for Independence:  people who live in the country can always repel people who don't live in the country, sooner or later.  The Irish didn't win independence in 1918 (the Irish Free State was not declared until 1921), but they were, like the Vietnamese, like the colonists, fighting for their homeland, and for home rule.

I suppose we can make bad analogies to various homegrown secession movements, but since none of those are going to succeed, it's not helpful to Mr. Pierce's argument. Which is kinda the point, really. Yes, Goldwater was a looney who got swept aside in the heady days of 1964 when we'd won the war and the peace and prosperity was on every corner and we felt we could afford to be generous to the poor and even afford some measure of justice to the African Americans; and by 1972 that had all fallen apart.  Inflation was destroying incomes, jobs were beginning to falter, women were entering the workforce less because Ms. Magazine convinced them to, and more because the family needed the money.  And while the nation prospered still, in one sense; in another, that's when we started to feel poorer; and pretty soon two incomes became the norm and necessary, and while some things got cheaper, we became more aware of the cost of everything, and by the time Jimmy Carter told us the "energy crisis" was the "moral equivalent of war" (or "M.E.O.W."), the stage was set for morning in America and Ronald Reagan, if only because the newest generation of voters was sick of the "liberalism" of the '60's generation (we became "Boomers" a decade later), and they liked the avuncular old guy who did terrible things but since when were JFK and LBJ Boy Scouts?

Are we heading back to that?  Did we ever leave it?  But Reagan was not the blustering and terrifying Goldwater, while Cruz has embraced his inner racist and seems to long for the good ol' days of the 1950's, when real Americans learned to hate Castro and Communism and still loved John Wayne.  The guy is stuck in a time warp:  his first references  just in time for the evening news yesterday were World War II.  Yeah, it works for the Tea Baggers, but they're a majority of Texas voters only because the Hispanics don't vote and the youth won't vote unless they can do it on Facebook.  They aren't, by a long shot, the majority of the voters in America.

Nor, to carry on with the bad analogies, do the majority of Americans see the government as an invading force bent on destroying our liberties.  That's been the selling point of conservatism since the beginning of the Republic.  Maybe when all these guys who say government is the problem finally decide to leave D.C. and form a new government that isn't the problem (makes as much sense as Cruz's reasons for his "filibuster"), I'll start to worry.  But I don't see Ted Cruz leading that revolution, or any change in government, because so far he's shown the political acumen of a dead rat.

And don't tell me his rise to the Senate is "amazing."  This is Texas.  We elected Louie Gohmert.  We elected Rick Perry to statewide office three times, and before that it was George W. Bush, twice.  Have you looked at the people we usually send to the Senate?  Hell, before Cruz we kept sending Phil Gramm there.  Face it, since LBJ our Senate selections have all been downhill.

Cruz's "political acumen" consists of believing the power of his personality will cause Americans to rise up and drown the Congress in indignant phone calls that will cleanse the Aegean stables of the Capitol. Yeah:  that didn't happen either.

Pierce loves this Manichean vision of politics:  if the bad guys are still standing, if they still have a base, no matter how small, then the good guys have no hope and it's all over but the cryin'.  Look, the Cruz "filibuster" is so inside baseball it's under the stitches.  Even in Texas almost no news outlet noticed.  Claire McCaskill's remarks were on one of the least watched shows on cable TeeVee.  Lawrence O'Donnell, ditto (his audience is probably smaller than Morning Joe's).

Ted Cruz will not lose an election based on this long talk. But he's got no broader a base of support nationally than Rick Perry does.  Cruz might make it through the primaries because he won't speak kindly of immigrants, as Perry did (irony alert!)  But run that stuff about how great Jesse Helms was in a national election, and he's over.  He might survive in Texas, but I'm not sure he would.  Even down here such blatant embrace of racists is toxic.

As for his continued presence in the Senate:  well, you can't get anything done if even your GOP colleagues won't stand with you.  Cruz has the support of Rubio, Paul, and Lee.  Not exactly a majority, by any calculus.  And it's likely he just hasn't yet had a chance to piss them off.
Cruz has had his 15 minutes.  He's not eloquent; he's not smart; he's not Voldemort.

Historical Footnote:  Phil Gramm, who, if memory serves, was the first Republican Senator from Texas since John Tower, was also a popular conservative figure back in the day.  Then he ran for POTUS, and hit the townships of New Hampshire, where campaigning requires the personal visit.  Turns out Mr. Gramm was so personally obnoxious his handlers practically had to drag him away from fervent supporters who were already deciding this was not the man for them.

Any similarities to Ted Cruz are purely historical.