The 2nd Amendment is the Only Protection We Have! 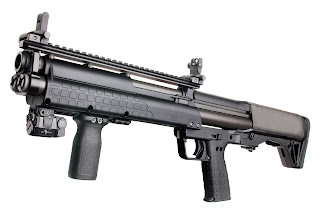 NOT an assault rifle!  So don't you call it that!  Uh-UH!

So, it was just an accident:

In late August, WKBT reported that Jackson County Sheriff’s deputies were called to a home in the Town of Alma, where the 4-year-old girl had been struck in the side of the head with a shotgun blast.

How did such a frightening thing happen?

According to the Jackson Country Chronicle, authorities in Jackson said this week that 48-year-old father Fred B. Maphis had told his son to say that the shotgun had accidentally gone off when he dropped it.


Boys will be boys, and guns will be "going off," so all okay, right?  Not really:

But the son later admitted that the father instructed him to lie because he had pointed the gun at the girl and pulled the trigger.


And why did he point the gun at his sister?

The boy told authorities that his sister had asked him to aim the shotgun at her, but he had made the mistake of putting it too close to her ear.

And because it's always reasonable to leave a shotgun where a 6 year old can get to it, especially where he can point it at his 4 year old sister.

A sheriff’s office complaint said that the mother told investigators that the boy had been training with firearms since the age of 3. She said that he had his own .22 caliber rifle, but he was only allowed to shoot with adult supervision. The father insisted that he had just forgotten to unload and secure the shotgun.

Oops.  Apparently that three years of training didn't include any basics of gun safety.  Like the rule I, a non gun owner all my life, learned the first time I picked up a friend's gun:

And now the father is facing charges for leaving the loaded gun available, and for telling his 6 year old to lie about it.  Justice!  Amirite?  So the 2nd Amendment remains safe and sacrosanct.  And at least the 6 year old didn't play video games, which is the real problem in America:


“Are more people susceptible to playing video games?” Hasselbeck wondered. “Is there a link between a certain age group or [demographic] in 20- to 34-year-old men, perhaps, that are playing these video games and their violent actions?”

“What about frequency testing?” she added. “How often has this game been played? I’m not one to get in there and say, monitor everything, but if this, indeed, is a strong link, right, to mass killings then why aren’t we looking at frequency of purchases per person? And also, how often they’re playing and maybe they time out after a certain hour.”


Had the guy who shot up the Navy Yard not played video games, he might not have entered the Navy Yard with a shotgun, donchaknow?  Of course, more recent evidence that the guy called police in Rhode Island recently to complain to the police that people were microwaving messages into his brain which clearly had nothing to do with his mental state on that fateful Monday morning.  No, it was the video games.

It has to be video games because we can't blame television or movies because people like Elizabeth Hasselbeck grew up with violence on TV and in the movies, and she's not crazy!  Of course, TV and movies used to get blamed for violence in real life, but we don't do that anymore, we know better.  Video games are the problem.  Blame anything but the fact this man walked into gun store and passed a background check so it's okay that he bought a shotgun, but not okay that he used it that way but hey, price of freedom, amirite? Are we gonna limit access to shotguns just because somebody is gonna buy one to shoot as many people as he can, or leave it loaded so a 6 year old can point it at his 4 year old sister?

Besides, the gun is never the problem.  Ever.  After that rule, what other rule matters?

So what we need to do is regulate who gets video games and how often people can play them because those things are DANGEROUS!  Oh, and make sure everyone, no matter how young or mentally deranged, has easy access to shotguns, which are NOT DANGEROUS because they are protected by the Constitution.

Unlike adults and 4 year olds, who are on their own.