Is this a great country or what? 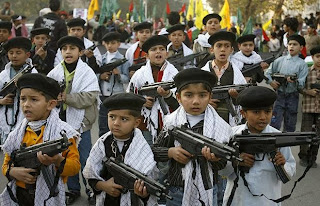 Which way to the bad guys?

Incidentally, the average person can’t walk into an effects shop and buy the explosive squibs used to simulate gunshots on teevee…you need an explosives license. Thanks to the NRA, there’s no such restriction for an AR-15 with real child-shredding bullets.

Or on just leaving guns around where kids can get 'em.  Oh, wait, that is restricted.  Good thing it's working:

Authorities said they were concerned a Texas couple attempted to hide a firearm after their 3-year-old son accidentally shot himself, leading to the removal of one of the boy's lungs, the River Cities Daily Tribune reported Friday.

Which one is the good guy who should have had a gun in this scenario?  Or is this an example of gun laws not being enforced?  It's so hard to keep up with the excuses.  Maybe the kids should have been armed against the parents.

At least those kids didn't have access to explosive squibs.  They might really have hurt someone with those things.