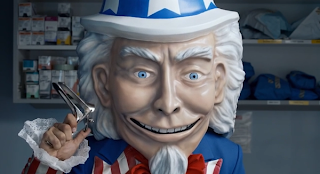 A puppet with gynecological equipment is a scary thing, indeed

This is a curious argument, and I'm trying to make some sense of it (the excerpts on Hobbes and Montesquieu are here and here, respectively):

Hobbes had tried to focus people’s fear on a state of nature that lay in the future and in the past and on a real sovereign in the present, Montesquieu on a despotic terror that lay in the future or in the far-off lands of Asia. Both sought to focus people’s fear on objects outside themselves or their countries. Tocqueville turned people’s attention inward, toward the quotidian betrayals of liberty inside their anxious psyches. If there was an object to be feared, it was the self’s penchant for submission. From now on, individuals would have to be on guard against themselves, vigilantly policing the boundaries separating them from the mass. At the height of the Cold War, American intellectuals would revive this line of thought, arguing that the greatest danger to Americans was their own anxious self, ever ready to hand over its freedom to a tyrant. Warning against the “anxieties which drive people in free society to become traitors to freedom,” Arthur Schlesinger concluded that there was, in the United States, a “Stalin in every breast.”

The other object to be feared was the egalitarian culture from which the democratic self arose. Tocqueville did not call for a reversal of democratic gains or a retreat from equality. He was far too much a realist and believer in the revolution’s gains to join the chorus of royalist reaction. Instead, he argued that to preserve the gains of the revolution, to help the democratic individual fulfill his promise as a genuine agent, the self would have to be shored up by creating firm structures of authority, restoring to it a sense of local affiliation, fostering religion and other sources of meaning, situating the self in civic associations whose function was less political than psychological and integrative. To counter mass anxiety, egalitarians and liberals, democrats and republicans, should cease their assault on society’s few remaining hierarchies. They should not participate in the socialist movement to centralize and enhance the power of a redistributive state. Instead, they should actively cultivate localism, institutions, and elite authority; these remnants of the Old Regime were the only bulwark against an anxiety threatening to introduce the worst forms of tyranny seen yet. The task, in other words, was not to continue the assault on the Old Regime but to stop it, to focus attention not on overturning the remains of privilege—local institutions and elites, religion, social hierarchies—but on enhancing them: these were the only social facts standing between democracy and despotism, freedom and anxiety.

It's the second paragraph which most intrigues me, as it makes Tocqueville sound like a modern day Republican critic of "big government, if not quite a radical Tea Party enthusiast.  "A sense of local affiliation, fostering religion and other sources of meaning, situating the self in civic associations whose function was less political than psychological and integrative."  That could be the philosophy of Wendell Berry, with a push in the right direction.  It could also be the philosophy of Grover Norquist or Ted Cruz.  Nuance in distinction is everything.  "Localisms, institutions, and elite authority" could be Berry's emphasis on "think locally, act locally," on the value of place as small and particular as the Port William membership, on institutions like farming and the practices of human agriculture handed down for generations, a knowledge based on experience of the locality and the wisdom of human care, an elite authority contained in the memories of Old Jack and the wisest and best farmers of Port William.  Or it could be state governments repressive of all but those who have the political power, which walks hand in glove with economic power, institutions of business and religion which rigorously repress dissent and difference and seek to obliterate all but a narrowly acceptable social norm, based on an elite authority with such a narrow vision of "humanity" it is itself almost inhuman.  One is Berry's fictional demi-paradise, the other the dreamed of norm of Tea Party radicals.  Either could claim to be "the only social facts standing between democracy and despotism, freedom and anxiety."

And would either keep the monsters from coming to Maple Street?  Would they stop the relentless march of the book burners, of the creators of the antiseptic society behind "Usher II" and "Pillar of Fire," or the anesthetized world of "The Pedestrian"?  Or would they create it?

Which is why I tend to distrust such sweeping generalizations as this book seems to commit.  Everything peculiar and particular about Hobbes or Montesquieu or Tocqueville is flattened out in order to serve the thesis, because the Big Idea cannot fail, it can only be failed, and looking at history from a distance always gives a clearer picture than looking at history from street level.

"Warning against the 'anxieties which drive people in free society to become traitors to freedom,' Arthur Schlesinger concluded that there was, in the United States, a 'Stalin in every breast.' "  Yes, and we all watched the monsters come to Maple Street, and we all learned the lessons of all the Twilight Zone stories about racism and intolerance and nuclear war and even the dangers of tyranny (one can be forgiven for thinking there was at least once such show a week in the series) and we all knew it was not only fear itself we had to fear, but fear of ourselves.

And yet we didn't destroy the world in nuclear war or McCarthy induced paranoid delusions, and the race war that should have come never came, in large part because the race movement itself was a religious movement (King was a Baptist preacher, Malcolm X a minister of the Nation of Islam; the Black Panthers pretty much came and went, impressing almost no one and annoying almost everyone).  And it yet larger part because, while we may all potentially be Stalins, we don't really tend to behave that way.  Some individuals do, of course; but we call them "criminals," and do our best to punish them for their crimes.  The rest of us are just interested in getting on with living, which is why the dystopias of Bradbury never become real, and the gravest dangers of democracy as envisioned by Tocqueville never materialize; at least not until someone, like the alien visitors to Maple Street, tries to stoke our fears.  And even then, the example of Maple Street is instructive:  by morning, the frightful situation won't look nearly so frightful; and one thing history teaches us, is that for every night, there's always a morning.

History also teaches us we are seldom as afraid as we are told to be.

From a distance
We all have enough
And no one is in need
And there are no guns, no bombs and no disease
No hungry mouths to feed
From a Distance
We are instruments
Marching in a common band
Playing songs of hope
Playing songs of peace
They are the songs of every man

I've always thought there was more irony than sympathy in those lyrics; maybe more than the author realized.  From a distance we all have enough; but on the street level?  As I heard this morning, the government shutdown, at least so far, isn't serious enough or prolonged enough to truly affect the U.S. economy, which is big enough to even shrug off the sudden unemployment of several million people.  But at the level of the government workers, and the companies that make money off tourists at national parks, and the contractors working for government agencies no longer operating, and the recipients of WIC or Meals on Wheels?  Or even the veterans taking long planned trips to D.C., blocked from entering the WWII memorial?

My father, as I've mentioned, took one of those trips; and they visited many more places than the WWII memorial.  The Memorial might be open to veterans; but the rest of D.C. is shut down.  Are Louie Gohmert and Michelle Bachmann going to escort those veterans to the rest of the sites in D.C. they want to visit (like the Air and Space Museum) and insist those doors be flung open?

I didn't think so.  From a distance, like the distance from here to France (the U.S. WWII cemetery there is closed.  Where is the outrage for families making a once-in-a-lifetime trip to France, only to be turned away from the U.S. cemetery?  Are there no WWII veterans there?  No cameras?  No conveniently located politicians?)  At a distance, everything looks like one thing.  At the level of real life, of individual existence, it looks altogether like something else.  The fear being focused on now by the anti-ACA forces is somewhat "toward the quotidian betrayals of liberty inside their anxious psyches."  But the anxious psyches are those of the opponents of the law, who fear not that giant-headed Uncle Sams will enter examining rooms with speculae, but that government will actually be invisibly helping ordinary people's lives be better.  It is the invisibility which is most frightening to these opponents:  if people accept "Obamacare" into their lives, if it becomes as invisible as Social Security and Medicare, what potential for terror remains in it?  The betrayal of liberty lies, not in the actions of the government, but in the actions of the people:  without anxiety, how can they be prevented from embracing this great wrong, and making it (as happened with Social Security and with Medicare) a right (in both the sense of "proper" and of a legitimate claim by the individual on the government)?