Hallowe'en fun this year will be duly authorized by.... 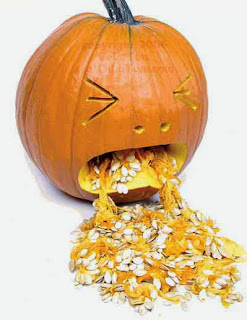 Put this in your agenda driven festivity and smoke it!

The Hallowe'ens of my memory were affairs where children were free to wander the streets until what was, for us, late at night.  The worst danger (it happened to my brother and I one year) was getting hit with a thrown egg.

I know there are perceived dangers now, such as traffic.  The fear of poisoned candy and razor blades in apples still persists; at least at the edges.  But sadly, I think this is the reason for "Trunk or Treat"* and other such "events:"

In recent years, Halloween has become an increasingly agenda-driven festivity, with an emphasis on allergy-free goodies and the grim news stories about where your cocoa and palm oil are sourced. Somewhere along the way, toothbrushes and pencils have become acceptable treat currency. And childhood obesity is a serious health problem in our country, one that is largely a result  of environmental factors. Shaming children and their parents, in the form of tactlessly worded school fitness letters, misguided, mopey ad campaigns  or Disney initiatives equating weight with villainy has become commonplace. Kids and their parents are surrounded by messages that they are weak and bad, and that they therefore don’t deserve to share in the same pleasures as their thin counterparts. (emphasis added)

That's what bothers me:  the idea that "fun" cannot be had unless it is well organized, supervised by adults, limited to known persons, and conducted within a set time frame, at a set location, within a set schedule.  I can remember the house where the owner lay, dressed in black, on a bench in the front yard, in shadow; and rose up as kids walked past.  Scared my daughter to death; but it was hilarious, too.

You won't get that, or the houses that were decorated inside and out (a memory of my childhood), the one passing out homemade popcorn balls and caramel apples, at a "Trunk or Treat."  It doesn't fit the "agenda," which is one more way the corporation is invading our personal lives, one more way we become a little more accommodating of the machine.  Sadly, it is certainly one more way to be sure our kids are protected from the world we seem to have made but have no idea how to live in.

*sigh*  Where are the Hallowe'ens of yesteryear?

(*and freaking out, even in jest, about "Satan" at Hallwe'en?  What kind of retrograde course is our society heading down?)