Failure is not an option. It comes as standard equipment. 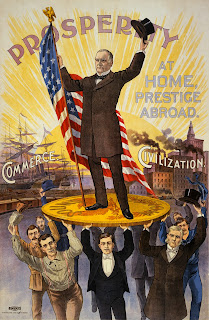 Because, why not?
So here's why we can have a government default:

"If we actually didn't pay the interest on the debt, that would have a disastrous effect on our credibility and the interest rates that we pay going forward, and that's a further reason why I'm sure that if we actually ran into the limits, the Treasury would find a way to make sure that all those interest payments get paid," he said later. "Then the contractors, the hospitals, the universities and others would understand that for a matter of weeks, they won't get benefits.

They won't get the cash on time."


It's kind of the Rand Paul argument:  trust us, we're good for it!  And we'll gladly pay you Tuesday for a hamburger today, because isn't that how businesses do it?

Set aside the memory loss that forgets the panic in DC and capitals around the world when the credit markets froze at the end of 2008, and nobody could get a loan, and focus on the idea here.  Who will get paid?  Social Security recipients, because (that's a popular argument, by the way).  Hospitals, for Medicare, etc?  Not so soon.  Does that mean hospitals will stop treating Medicare patients?  That doctors will stop seeing patients on Medicare?  Or just insist on some other assurance of payment?

What do you think?

And the military?  Do they get paid?  Do contractors get paid to sell us more bullets, bombs, etc.?  What about all the private contract support for the military?  The check is in the mail?  And do we really padlock the national monuments now, because employees aren't getting paid?  Do we pay Congress, or not?  Do we pay for WIC (silly question)?  Do we shut down the IRS, the FBI, the CIA, the NSA?  Do we close the courts, the DOJ, the Supreme Court?  Tell 'em all to go home, we got no money?  Do we tell the oil companies we'll pay for the jet fuel someday, but we need it today?

"A matter of weeks" is a lovely euphemism for "who knows when?," isn't it?

How, exactly, does this work?  Who are the idiots who think it could possibly work at all?  This would not be a "partial government shutdown," it would be a total governmental collapse.  Tell everybody to wait until the taxes come in and the bond holders are paid, and we'll get to you eventually, maybe, possibly, we hope?  Tell the IRS agents to keep collecting taxes, they'll get paid someday if enough revenue comes in we can afford it?

Who are these idiots, and what world do they come from?