War on the Workers 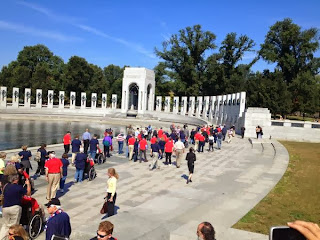 There is a small but not silly point to be made here.

Dave Weigel calls the shut down of the WWII memorial a "Washington Monument strategy:"

You close something famous and beloved, and people notice—see all the stories about the shuttered "PandaCam" at the national zoo.

And the implication is closing a walk-through monument is silly because such monuments "are guarded but generally free to walk through all times of night."

Now, there is a reason such things are guarded, and part of it is to prevent vandalism; obviously not something that's going to happen from a group of WWII veterans.   But what if one of those veterans falls face first into the reflecting pool?

I know, sounds pretty stupid and unlikely, but what if?  This isn't an open space owned by a local government or city, it's a national park operated and maintained by the U.S. government.  The guards are there mostly to help people who came to enjoy the space; not to stand over them with hands on holstered guns to be sure they don't pee in the pool.  So what happens if someone in the group has a heart attack, or a stroke?  What if someone stumbles and lands face first in the pool?

There's a reason these places are closed, and that's because the guards aren't getting paid.  Nobody who works for government, aside from the Congress and some other employees, are getting paid.  Some are working (air traffic controllers, for example) because they have to; but they aren't getting paid.  Will they get paid on Tuesday for being forced to buy a hamburger today?  That may well be up to the terms of the funding bill.  Will the guards who aren't manning the national monuments get paid for not working?  Maybe not at all.

It's obvious to us somebody might fall down a mountain in Yosemite, or even slip into the Colorado at the bottom of the Grand Canyon.  It's not so obvious that someone might get hurt at the WWII memorial, but if it happened, who would help them?  Louie Gohmert?  Should we instead post signs saying "Enter at your own risk?"  Or just tell the guards to get to work, and maybe we'll pay you enough to cover lunch and the mileage it took to get you to work, in a month or two?  (Parking is your problem, bub!)

Funny how no one wants to realize government employees are working people, too.....

UPDATE:  Of course, if the Parks Service Department fails to keep the monument clean and tidy, what with all these visitors getting their Congresspersons to remove the barricades, I suppose we won't miss that government service, either. Or maybe we'll just realize we don't need national monuments in the first place:

Appearing on Fox & Friends just hours after Republicans in the House failed to pass a “clean” continuing resolution to keep the government open for 6 more weeks, Rep. Marsha Blackburn (R-TN) — a prominent party messenger — joked that keeping the government closed will probably help the public realize that they didn’t need it in the first place.

I sorta remember that argument being made 17 years ago; the response kinda surprised Newt Gingrich.

Too bad there isn't a Congresscritter willing to go to Maryland to remove some barricades:

A Maryland-based KKK group was approved to hold a rally on Saturday at Gettysburg National Military Park, according to WCAU. Park officials told the news station that the rally won't happen because they revoked all permits for special events when the shutdown began Tuesday.

I mean, surely it's "their park," right?