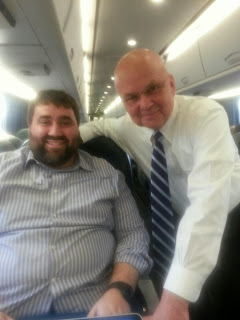 No, I insist you be my guest at an undisclosed location....


Hayden was aboard an Acela train outside Philadelphia and talking by phone with a reporter when Matzzie, who was sitting nearby, recognized him. Matzzie heard Hayden insist to the reporter that he be quoted anonymously, as a "former senior administration official".

Then Matzzie began live-tweeting as the nation's former top spy badmouthed the Obama administration, apparently in connection with the revelation hours earlier that NSA had monitored the phone calls of at least 35 world leaders' telephone lines.


As I've said before, I sometimes hear my mail carrier coming down the street, as she talks to her Bluetooth earpiece.  "Old-fashioned" land lines have a feedback that lets you hear yourself, so you tend to talk softly.  Cell phones (and most cordless phones, now) don't provide that feedback, and you tend to talk loudly.  We're all familiar with the phenomena in the relatively quiet environment of, say, a book store (I used to listen to cell phone conversations as I shelved books. It was impossible not to.  Oddly, I seldom heard customers talking to each other about things I really didn't need to listen to.)

And I only mention it because:  well, it's funny.  Who needs technology when all you gotta do is follow the Good Book:

"Those with ears had better listen!"

On the pic. His office called him and then he graciously offered me an interview. We talked around the 4th amendment and foreign spying.
— Tom Matzzie (@tommatzzie) October 24, 2013

And it ends, of course, with:  "I know you think you understand what you thought I said but I'm not sure you realize that what you heard is not what I meant."

Which is probably why Hayden wanted a picture of Matzzie.